The fashion crowd from Down Under turned out Thursday for the seventh annual Australian Fashion Foundation Summer Party. 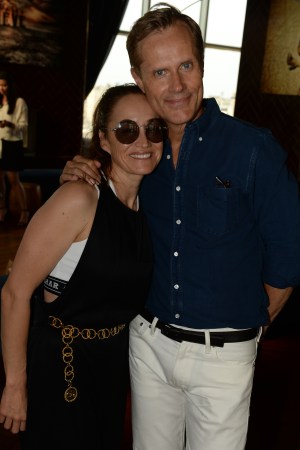 Dion Lee, Camilla Freeman-Topper and Marc Freeman and Nicky Zimmermann were all floating around The James hotel in lower Manhattan on Thursday night. It was time yet again for the annual gathering of fashion’s Aussies, otherwise known as the summer party for the Australian Fashion Foundation.

A tradition now in its seventh year, the party was moved from July to June this year to avoid the sweltering temperatures of summer. But as luck would have it, New York saw its first 90-degree day on Thursday, a turn of events that had some recalling their native land.

“Being here in the summer, there are a lot of parallels with being in Australia,” said Lee, who’s escaping winter back home by spending the next month in New York.

There was another model in attendance, your average chiseled hunk, but he was working, braving the nippy pool while sporting tiny trunks in festive Australian colors.

Lee is not alone in hopscotching back and forth between New York and Australia.

“To be able to spend time in two amazing countries, I will never let jet lag get in the way of enjoying that. It’s such a gift,” said a bubbly Zimmermann, who was in town before heading to the Hamptons for the weekend.

And what of the stereotypes Americans hold of her compatriots?

“I think they’re mostly true. We like to have fun, we definitely like to have a drink, and, to the dismay of everyone else,” she said, before referring to a popular staple Down Under, “we do like Vegemite.”