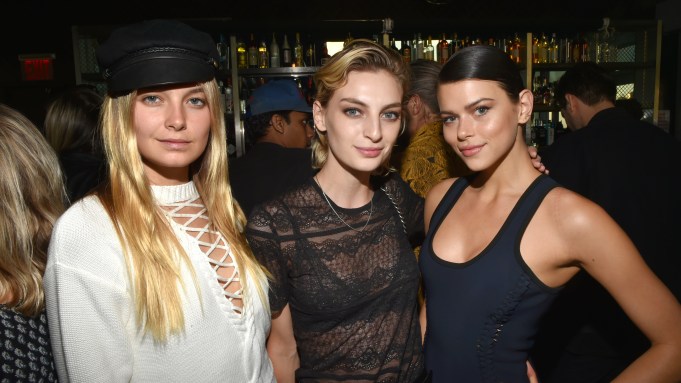 “I think it’s really nice to be able to walk into a room in New York City and see Aussies, familiar faces in the industry, ya know?” Bridget Malcolm said in her Perth-bred twang on Wednesday night. The Victoria’s Secret model was stationed by the bar at Jimmy at the James Hotel, the rooftop abuzz with Aussies.

The Australian Fashion Foundation had taken over the hotel rooftop on Wednesday night for its annual summer party. Other familiar faces at the party included Dion Lee, Camilla Freeman Topper, Madison Stubbington, Charlee Fraser, models Georgia Fowler and Rose Smit, and Malcolm Carfrae, who founded the initiative eight years ago along with Julie Anne Quay.

“We wanted to create a fun social platform for all Australians who work in fashion in New York to be together and help each other, and just be in each other’s orbit,” Carfrae explained. “But we also thought, let’s take it one step further and turn it into something that actually gives back.”

“I think it’s a fantastic initiative and it helps Australian people get into the U.S. market,” remarked Topper, who was stateside showing her resort collection for Camilla & Marc. “Here I think people are a lot more casual,” she said of the difference between the two markets. “Particularly this trip more so than ever before. I really feel like in the streets everyone’s just a lot more relaxed. I think because summer’s started and everyone’s, like, ripping their clothes off.”

While summer temps have inspired New Yorkers to display more skin, it’s shifting to winter in Australia — Topper designs concurrently for both markets. “Resort’s actually the only season that’s the same,” she commented. “One season less you have to double up on.”

Outside on the deck, designer Dion Lee was poolside basking in the late afternoon sun and taking in the downtown views. “There’s a lot of lifestyle parallels between New York and Sydney,” he said, before ticking off what he misses about his homeland: “The space, the amount of space, and the beach. It’s very spread out,” said Lee, before reiterating his main point: “Also the beach. I think it’s something you really appreciate when you’re away from Sydney.”