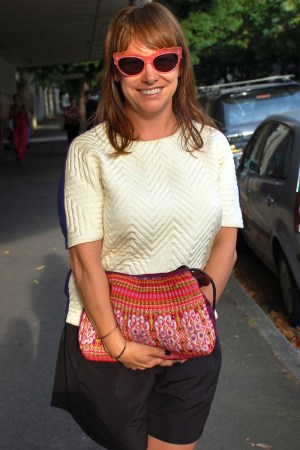 Flanked by Julia Nobis, the latest star of the Saint Laurent spring campaign, Wilson was among a posse of Sydney-, New York- and Beijing-based Australian fashion players at the One Moncur cocktail bar in Woollahra to cheer on the winners of the foundation’s 2013 burse.

Natasha Fagg and Tim Watson, recent graduates of Melbourne’s RMIT and Perth’s Curtin University, were announced as the joint recipients of 40,000 Australian dollars or $41,924 at current exchange — double the previous year’s funding for the foundation, thanks to the support of Woolmark.

Established in 2009 to help young Australians gain experience in the New York fashion industry, the organization is undergoing a name and mission change in 2013. Moving forward as the Australian Fashion Foundation, its network of Aussie fashion expats is expanding across the Atlantic, and Fagg and Watson will have the choice of heading to either New York or Europe next year for their six-month internships.

“I will always give them some form of advice or put them in contact with someone, because I’ve been in that situation myself,” said Carfrae. “The smallest words of advice, even if it’s only for five minutes, could make a big difference to their careers.”