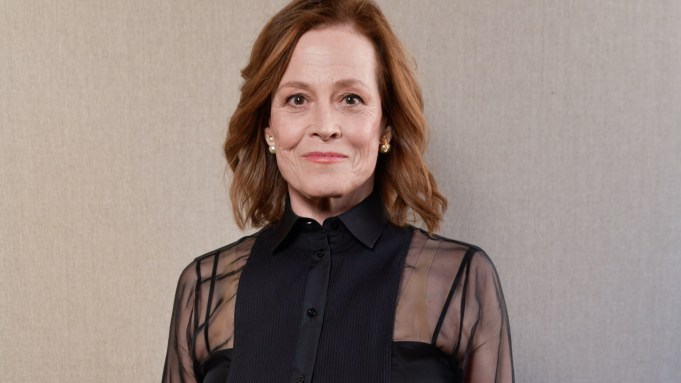 Maria Grazia Chiuri celebrated the roots of couture, honoring the hours of creation and craftmanship that go into every garment with her latest show for Dior on Monday afternoon.

Sigourney Weaver praised the house for shining a spotlight on the details. “When I see the workmanship, dedication and skill — you know I can’t do anything, thank goodness I can act — but when I see what these people can do I’m in awe, I really am,” she said.

The “Avatar” actress talked up the sequel that has been 13 years in the making. In the upcoming film she plays a new character in the form of a 15-year-old girl.

“[Director] Jim Cameron says I’m very immature, so he said that playing a 15-year-old will be perfect for you,” she joked. Taking on the role required a lot of physical training, and caused her to revisit her own youth, back when she reached her height of 5 feet 11 inches early on.

“I think most kids don’t feel they fit in no matter what they look like and I think it’s a very vulnerable time, and so the opportunity to play someone that age was a great challenge but a great, great thrill,” she told WWD. “Of course it boils down to what that experience was for you and I think we all remember — sometimes too vividly — what a memorable time it was. I was this tall when I was 11, so you can imagine that I have very strong memories of that time.”

The star said the upcoming film is “so strong emotionally, and it’s all about family.”

It was fitting then that the Dior show’s theme was “tree of life,” inspired by the work of Ukrainian artist Olesia Trofymenko. The same theme was central to the storyline of the first “Avatar” film.

Her “Avatar 2” costar Zoe Saldana was also on hand, making the show a family affair, and arrived hand-in-hand with relative Eli Saldana. They held tight throughout the show.

YouTube star Liza Koshy reflected on the show’s theme, introducing her mother Jean Carol to the crowd of young fans who were jostling to take pics with her. “The show is the roots of life and this is the root to my tree of life, my mom over here, and it’s been an honor to bring her to the first haute couture show I’ve ever been to,” she said.

When Koshy discovered the fans were also some of the embroiderers responsible for the work, she high-fived each of them and congratulated them on their work.

Naomi Watts also reflected on the theme, which was displayed in artworks that reached to the ceiling and lined the runway. “I am feeling the spirit of the love from these Ukrainian artists, and to celebrate them. There are so many things in the room that are making me feel optimistic, and that’s saying a lot,” she said of the bright, floral murals.

Watts reflected on the political mood in the U.S. and the world. “It’s very hard. There’s not a lot to be hopeful about. This is a terrible time with all that is going on,” she said, adding that it has lit her political fire. “I haven’t [been an activist] but now is the time isn’t it? It’s time to get strong and loud and shouty and organized, because we’re gonna fight it.”

The Australian actress praised Chiuri’s very visible support for the cause. “She’s a strong voice and somebody just asked me, ‘Is it appropriate for fashion to be political?’ And absolutely. Wherever, whatever your platform is, if you have a strong voice and strong beliefs, yes,” she said. “And for all women, right now, we need the voices.”