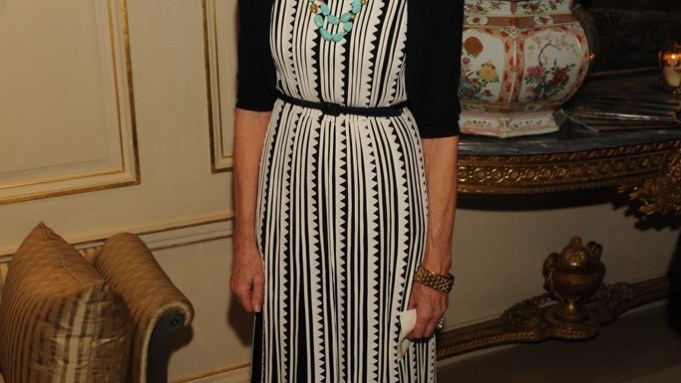 At a gathering on Monday night at 740 Park Avenue in Manhattan for Diana Taylor, the girlfriend of New York City Mayor Michael Bloomberg, some of New York’s wealthiest considered a future without the billionaire in charge.

There was considerable alarm about Bill de Blasio’s lead in the polls, along with his plan to raise taxes on New York’s upper echelon.

“I fear for New York City if Mr. de Blasio gets elected,” said Muffie Potter Aston. “He just wants to tax everyone to smithereens. You have to be fair to everyone. You have programs that support all of the people of New York. But if you continue to tax what you see as the upper-income brackets, it’s still only going to be providing a small percentage of additional income.”

Aston said this at the home of Christine and Stephen Schwarzman, cofounder of the Blackstone Group. Catching up near her were Barry Diller, David Koch, Barbara Walters, Police Commissioner Ray Kelly and his wife Victoria, Pepe and Emilia Fanjul, Colin and Elizabeth Callender and Carolina and Reinaldo Herrera. They had all turned out for the city’s first lady manqué, who had been named to the list of influential New Yorkers published annually by the society magazine Avenue. Taylor was on the cover of the A-list issue, a toast to the end of the Bloomberg years.

With only three months left for the mayor in office, it was dawning on the 740 Park Avenue set that his end is near. Already the order of things seemed to be slipping. Christine Schwarzman was alarmed about the beating of an SUV driver in upper Manhattan that has captured the tabloids. John Bernbach, the longtime advertising executive and a rare Democrat in the room, wished Commissioner Kelly had gotten in the race. Violaine, Bernbach’s wife, supported some of de Blasio’s platform, but still didn’t know enough about his plans for the city’s security.

Taylor declined to speak to reporters, instead conferring with Diller, Walters and Aston. It was up to the members of her social circle to speak to her accomplishments and the mayor’s, who was absent. Aston did not wish to see Bloomberg go.

“I’ve never understood why New Yorkers vote against their own interests,” said Jacqueline Weld Drake. “New York is a city of financial entrepreneurs, of genius stock traders and bankers. It would be a smart idea to keep it that way. It’s not a city that’s going to benefit from high taxes because people who have substantial incomes have a choice. They have a choice of venues. New Jersey beckons. Florida beckons. All kinds of other states who do better at job creation. We are really biting the hand that feeds us. No question about it.”