The yearly mix of ancillary awards shows, pre-parties and art openings kept the town busy on the nights leading up to the big show. 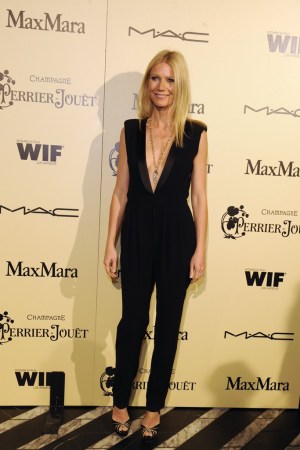 As the stars flocked to Los Angeles for the 84th Annual Academy Awards, the yearly mix of ancillary awards shows, pre-parties and art openings kept the town busy, and offered an outlet for some nervous energy on the nights leading up to the big show.

On Friday, Women in Film threw its annual bash celebrating the year’s Oscar hopefuls at Cecconi’s, where Gwyneth Paltrow played host, along with WIF president Cathy Shulman, to nominees including Viola Davis, Octavia Spencer and Jessica Chastain. “I want to say congratulations to all the beautiful women who have been nominated,” said Paltrow. “Have a great weekend and try to recover by Monday.” Chastain was savoring every moment, and planned to take her grandmother to the Oscars and the Vanity Fair post-party. “It’ll make it a little more real if I’m seeing it through her eyes,” she said. Over in a corner, Vanessa Hudgens and Selena Gomez traded stories, and Gomez said she still hadn’t decided on an outfit for Sunday. “My boyfriend and I are coordinating,” she said, referring, of course, to Justin Bieber. Elsewhere, Spencer chatted with former astronaut Mark E. Kelly, who came with Blythe Danner (Kelly, who is married to former congresswoman Gabrielle Giffords, is Paltrow’s second cousin).

On Saturday at the 27th Film Independent Spirit Awards, host Seth Rogen typified the event’s irreverent vibe by leading off with a quip: “I learned there’s a whole other Olsen this year. Where have they been keeping her?”

In keeping with the casual dress code, Shailene Woodley chose her sparkly Christopher Kane top “because it meant I got to wear jeans.” She also traded her photo-op Christian Louboutins for flats after walking the red carpet in bare feet.

Just before the show, indie fixture Mark Duplass put one myth to rest: “When the nominees show up and tell you that the awards are chill and they’re relaxed and wearing tennis shoes and ties, they are totally lying. They’re scared as s–t.”

RELATED STORY: The Costume Angel of the Oscars >>

On Saturday night, Chanel and Charles Finch partnered for their annual night-before-the-Oscars dinner at Madeo, where a mariachi band on the stairs announced each guest’s arrival.

“This is an Italian restaurant, right?” asked Rose Byrne, who was momentarily confused by the music. Down below, Chanel fans Rachel Bilson, Elizabeth Olsen, Freida Pinto, Teresa Palmer and Lily Collins had already gathered. Bilson hugged her friend “Jakey” Hoffman,” who had been at art shows all day with his father, Dustin. “He was like, ‘We’re stopping by this dinner. I feel so underdressed,’” he told her.

Harvey Weinstein, upon meeting Ginnifer Goodwin, told her, “The reason I know your show [“Once Upon a Time”] is that my daughters watch it. They’re addicted.”

“I love my job, but I miss home,” Goodwin said of working on the Vancouver set.

Weinstein was making the rounds on Saturday night, as The Weinstein Co. held its own preshow pep rally with Chopard at Soho House West Hollywood. Meryl Streep, Kenneth Branagh and Andrea Riseborough were there repping “The Iron Lady,” “My Week With Marilyn” and “W.E.,” respectively. Well-wishers besieged a trifecta from surprise nominations juggernaut “The Artist,” causing a bit of a logjam in the corner shared by stars Jean Dujardin and Bérénice Bejo and director Michel Hazanavicius. Though she was there showing support for her friends, Weinstein and his wife Georgina Chapman, Karolina Kurkova didn’t feel the need to toe the party line. Asked for a few of her Oscars picks, the model expressed her disappointment that Michael Fassbender hadn’t been nominated for best actor for “Shame.”