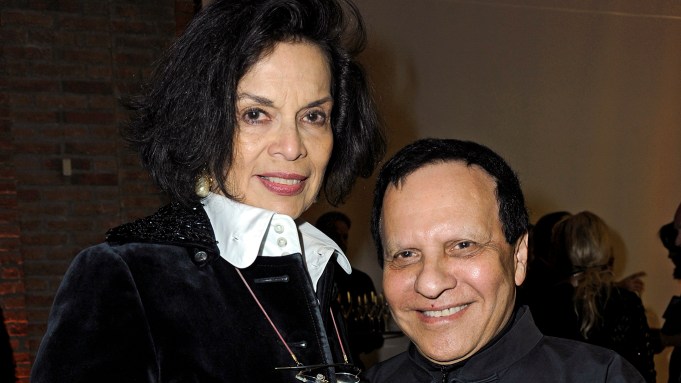 DINNER CHEZ AZZEDINE: When invited for dinner chez Azzedine Alaïa — in his vast, open kitchen at a big glass table — you never know who might show up. You just know that it will be an interesting mix of people and that the food will be delicious.

On Sunday night, both were up to the reputation at a dinner hosted by Surface Magazine and Alaïa to celebrate the magazine’s September issue with Alaïa as the cover boy. Guests included Kim Kardashian, who attended the dinner with her sister Kourtney before Kim got robbed at gunpoint in her hotel; Bianca Jagger; Peter Marino; Thaddaeus Ropac; Franca Sozzani; Pierre Hardy; Aurélie Bidermann; Laure Hériard Dubreuil, Noé Duchaufour-Lawrance and Ronan Bouroullec.

“It’s friends who come here; it’s open,” said Alaïa over cocktails in his shop on Rue de Moussy with Julian Schnabel’s large painting on a wall; before guests all went to his private kitchen for dinner. There were such regulars as Sozzani and novices like the model Maye Musk and Adidas vice president of global design Nic Galway. It wasn’t a first time for the Kardashian sisters.

“We’ve been here for lunch a few days ago so he fitted us, we tried on our outfits, it fits perfectly,” said Kourtney wearing a black Alaïa buckled dress, while Kim was wearing a white Alaïa dress.

“There’s only one man on this entire planet who can get me out of Rosh Hashanah but also get me bonus points,” said Marc Lotenberg, Surface chief executive officer, toasting the designer whom he called the “Steve Jobs of fashion.” “No detail gets left undone with him,” he continued.

Up next, Surface is to feature Kanye West on its December issue. “The story is all about how art impacts music and music impacts art and design. It’s slated for Art Basel Miami and a bunch of things,” Lotenberg said.

Marino revealed big projects: “You know the big Louis Vuitton [store] that’s going to open next year from Place Vendôme all the way to Faubourg Saint-Honoré. It’s a wonderful project for me. And then I am going to redo Bulgari so I’m really gonna have Place Vendôme. I have [it] already. I did Graff, Bulgari, Chanel, Hublot, Dior, Vuitton. I think if you have more than 51 percent, you are propriétaire,” he said. And does the architect go to the Ritz Paris as well on the Place Vendôme? “I don’t go. You know why? Because of the way I look,” he said, wearing his signature black leather uniform. “The Louis Vuitton show on Wednesday is at the chantier of what I am doing on Place Vendôme. They told me I have to stop working on it; they’re setting it up for the fashion show.”

Meanwhile, Ropac — whose gallery is located a stone’s throw from Alaïa’s in the Marais district — said he’s opening a Marcel Duchamp and a Robert Rauschenberg exhibitions, on Oct. 20.

Jagger, who was wearing Prada, looked apprehensive. “I am very concerned about what’s going on in the world, in America, with Mr. Trump,” she said. “I’m hoping, I am praying that Hillary Clinton will win. I was in New York for the debate, at the opening of an extraordinary ‘Tristan and Isolde,’ one of the greatest, but we went out from time to time to see the debate.”