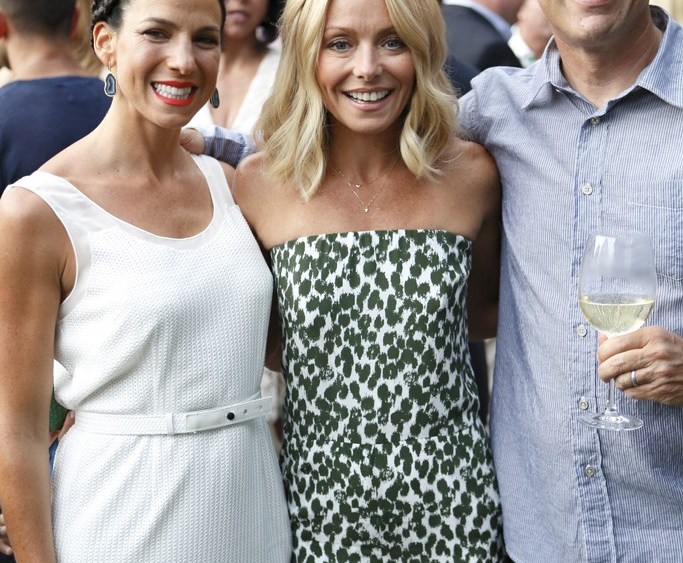 It was a calm, cool and clear evening in Amagansett, N.Y., on Saturday for the annual Baby Buggy Summer Dinner at Jerry and Jessica Seinfeld’s estate, and Cameron Diaz really wanted to take a “prom photo.”

“Come on, David. Prom photo!” Diaz cajoled, pulling Rag & Bone’s David Neville behind her in profile against a floral wall and into a pose familiar to teenagers nationwide.

“California is just…uck,” Diaz groaned, “It is a desert, after all…it’s a desert. The East Coast is where it’s at.”

Neville’s wife, Gucci Westman, briefly feigned horror at her husband’s efforts at mugging for the cameras before greeting the freshly arrived Kelly Ripa and Mark Consuelos. Ripa, in a green Stella McCartney jumpsuit, was less subtle in taking in the view.

“Pretty girl,” Ripa cooed at Diaz, “I want to be in a photo with the pretty girl.”

“This is my first time Baby Buggying,” Diaz shared brightly.

The charity was founded by Jessica Seinfeld in 2001 and provides new and gently used clothing, gear and services to families in need.

“Well, we have about a million kids between us,” Marcus Wainwright said of himself and Neville, whose company was cohosting the evening’s affair. “Jessica approached us about working together, and it just…made sense.”

Neville laughed: “I think we have to make a speech later. Seems like we need to work on it?” The pair promised better material to follow and went off “in search of inspiration,” entering a crowd that held revelers like Alec and Hilaria Baldwin, Naomi Watts, Hilary Rhoda, Sean Avery and Tiffani Amber Thiessen.

Cocktails were held in front of the Seinfelds’ guest house and within its adjoining barn, separated from the street by an expanse of lawn and a small baseball diamond, a short drive along a rolling stretch of tree-filled green from their main summer residence by the water. Dinner was to be held under a sailcloth marquee lit by carefully calibrated Edison lightbulbs on different lengths of cord. The entertainment for the evening was master paper cutter Hou-Tien Cheng, who wheeled a pushcart and cut profile portraits of guests, crowns from paper plates (the Seinfeld kids wore them with much aplomb) and the occasional lewd figure for older male guests, all in less than 10 seconds.

Jessica Seinfeld was feeling a little sentimental. “I was thinking today about how our daughter’s going to be 13 in the fall, and she is, like, the entire inspiration behind all this…I never would have started this without her, and I keep thinking, all these families are helped because of the birth of that child.”

As for her cohosts, Seinfeld was effusive.

“[Wainwright and Neville are] just the coolest guys,” she said. “You just root for them. I love the company…and Jerry loves it. His favorite pair of trousers is Rag & Bone. The fourth-happiest day of his life, after the birth of our three children — I stand by this — is the day that I gave him this blue pair of Rag & Bone trousers. He hasn’t been the same since. He’s Jerry 2.0! All because of this great pair of trousers.”