The Los Angeles charity drew a crowd of baby boosters on Saturday. 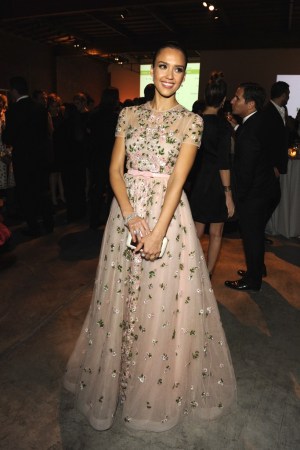 That the baby boom has overtaken Hollywood was evident in the starlet power at Saturday’s first Baby2Baby gala, held at The BookBindery in Culver City, Calif.

“It started as a little grassroots group to gather donations for moms and babies, and now we’ve got diamonds,” said Patricof, referring to presenting sponsor Harry Winston, whose wares were displayed in vitrines throughout the industrial space and on guests such as Zoe and Jenni Kayne.

“Of course, there had to be something for the husbands, too, so we made sure to have amazing chefs cooking tonight,” she added, noting that hipster chefs Jon Shook and Vinny Dotolo enlisted their friends Roy Choi, Josiah Citrin, Neal Fraser, Suzanne Goin, Ilan Halls, Rory Herrmann, Ludovic Lefebvre, Zoe Nathan, Dahlia Narvaez, Candace Nelson, Zach Pollack and Steve Samson, Michael Voltaggio and Micah Wexler to help with the luxe food stations. The enticement made it hard to stay away for guests Amanda Anka and Jason Bateman, Oliver Hudson and Erinn Bartlett, Mindy Kaling, Ali Larter, Natasha Wagner, Devon Aoki, and Molly Sims’ husband Scott Stuber, who said, “I don’t have to worry, because she’s the one who gets her photo taken.”