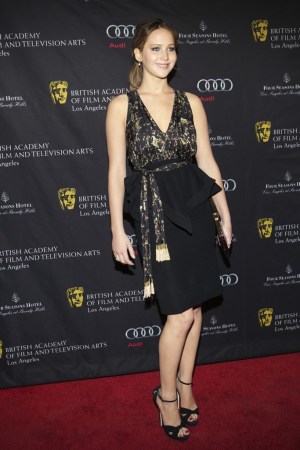 There were nearly as many Yanks as Brits at Saturday’s BAFTA Los Angeles Tea Party at the Four Seasons, where five types of tea flowed along with Champagne and coffee. “Downton Abbey” scribe Julian Fellowes surveyed the room with a smile, saying, “Most of my characters are represented here today.”

Among them was Michelle Dockery, who said, “It’s thrilling the reception we’ve all gotten in the States. I couldn’t be more excited.” The statuesque Brit kept her cool in the presence of heavy hitters like Kathryn Bigelow, Harvey Weinstein and Ben Affleck. Others, like Juno Temple and Kara Hayward, were more nervous.

“I never know what to say when I meet other actors,” said Temple, standing a few feet away from Anne Hathaway. “I always worry that I’ll say something stupid and embarrass myself.” Hayward didn’t have time to think when Jennifer Lawrence made a beeline for her to tell her that she loved “Moonrise Kingdom.”

“OK, that was pretty major,” she told her friends after the exchange. Cutting out of the fun early was Amanda Seyfried, who had presenter’s rehearsals.

“It’s hard to go two steps here without a flashbulb going off in your face, so I’ll just walk out of the room backwards,” she quipped.