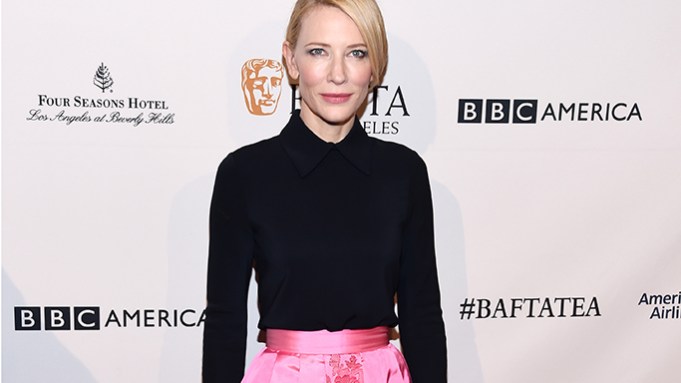 Saturday afternoon proved to be a time for Anglophiles as thespians from Britain, America and across other ponds gathered at the Four Seasons in Beverly Hills to celebrate the Golden Globes at the yearly BAFTA L.A. Tea Party.

Although the Earl Grey tea wouldn’t begin pouring until two o’clock, a press-shy Rooney Mara arrived 10 minutes before the other attendees such as “Carol” costar Cate Blanchett, Topher Grace, Priyanka Chopra, Brie Larson, Leonardo DiCaprio, Saoirse Ronan, Emilia Clarke and Danny Strong. While the “Carol” actress’ punctuality could have been a nod to British decorum, the same couldn’t be said for Rachel Bloom.

“I am not a classy, upper class, posh, British lady and I wouldn’t try to pretend that I am,” said the nominated “My Crazy Ex-Girlfriend” actress, creator and writer. “All I can do is wear appropriate attire of the day, be myself and hopefully not call the Queen of England ‘dude.’ I don’t think she’s here, but if she were I might call her ‘dude Queen,’ at least.”

But there were a few who defied the “selfie-free zone” sign just around the corner. “My daughter gave it to me,” said a smiling Jane Seymour as a crowd gathered around to marvel at her selfie-enhancing illuminated iPhone case while she snapped away.

With the personal photography ban out the window, Caitriona Balfe hadn’t forgotten propriety. “I will have you know that Irish people are very sophisticated,” she said. “My mother taught me well. I know my manners. I think.” On her “Lead Actress in a TV Drama Series” nod, Balfe commented, “I can’t really believe it. I go from thinking it’s hilarious to being really excited about it.”

“I’m actually a naturalized British citizen,” said “Carol” screenwriter Phyllis Nagy. “I lived in London for about 15 years. So I love everything about the culture and hope to go back and live there permanently one day.”

In agreement, “Flesh and Bone,” star Sarah Hay mentioned her appreciation for British culture, saying, “I live in Germany and they still have tea time, they still have cake time. I think that it’s so important to take time out of your day to just relax and be calm for five minutes at least.”