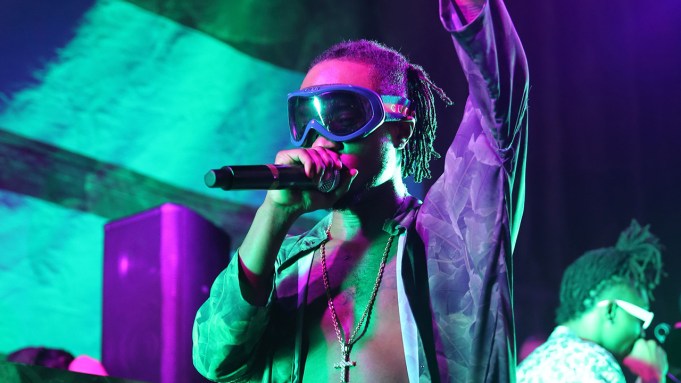 One thing quickly became clear at the 25 Beekman Street parking garage Friday night: the Baja East boys had come to party. So much in fact, that their after party was preemptively billed as “Major” on the invite. After taking a victory dance down the runway postshow, codesigners Scott Studenberg and John Targon continued their celebration to the upper two levels of the garage — fully vacant for the event — where the party went full-on Minion.

The designers held court by a van, which was full of stuffed Minion dolls, and reveled in the aftermath of their new collection. Drinks began to flow and a joint was passed around as they greeted admirers of their streetwear-friendly brand. Even Naomi Campbell stopped by, albeit briefly, to congratulate the pair.

Steps away, drag queens pushed shopping carts of stuffed Minions and MAC lipsticks through the dense crowd while upstairs on the roof, life-sized Minions wandered through the crowd. Partygoers inspired by what they’d just seen on the runway also had the chance to shop a see-now-buy-now style Baja East x Minions capsule collection at the party, although based on foot traffic, shopping wasn’t the most popular party activity.

Up on the roof — perhaps to the dismay of the high-rise condo occupants across the street, some of whom had gathered on the building’s terrace to take in the spectacle  — hip-hop duo Rae Sremmurd took over the stage from DJ Mia Moretti. The high-energy duo lured Studenberg and Targon onstage, where they proceeded to put their dance moves on full display for the span of the group’s live performance.

Just shy of midnight, a man — perhaps a neighbor miffed by the decibels of noise pumping from the rooftop? — was outside in the street blocking car traffic as guests attempted to move on to their next stop of the night. Maybe next season, Baja East should invite the neighbors.