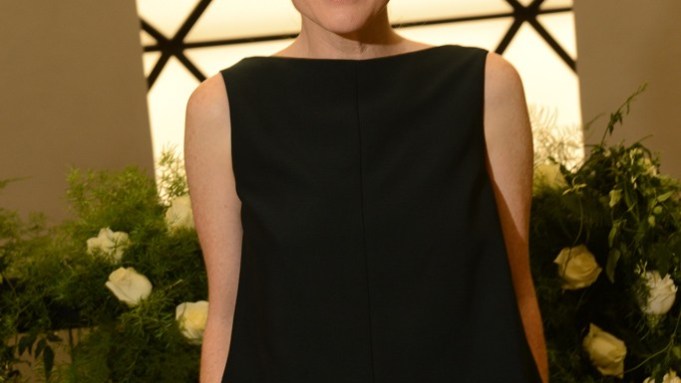 “I guess this is it,” one editor murmured to another, slipping past a row of orange cones on the precipice of Mercer and Prince Streets in Manhattan’s SoHo neighborhood. The block, already a particularly stacked strip of retail (Prada, Vera Wang, et al.), got a pair of new neighbors on Tuesday with the unveiling of the new Balenciaga store at 148 Mercer and the house’s first stand-alone men’s wear store in the U.S. across the way at number 149, feted that night with a cocktail party.

Towering hedges cordoned off the store’s entranceway, requiring rubberneckers to crane their necks to see who was inside. Guests idled in the foyer of the sleek space, taking it all in. Tangled Spanish moss and jasmine vines, dotted with cream garden roses, spilled over the second-floor balcony. Down below, guests — Julianne Moore, Max Snow accompanying Vanessa and Victoria Traina, Jenne Lombardo, Emily Weiss, Michael Avedon and a clique of models — drifted through the various salons on the lower level.

“This is quite amazing, it’s major.” Sofía Sanchez Barrenechea said, sipping on a cocktail, a golfball-sized lychee bobbing in it. Her eyes were pouring over the sweeping skylight curved overhead. “And this is kind of from the show, no?” she asked, pointing to the deep-green Verde Ramegiatto marble walls. The material triggered the marbling motif of Alexander Wang’s debut collection for the label. “These walls are insane.”

Apparently, the marble was the foundation for the store design. “The conversation began with the green marble. When Alex first mentioned it, I took it and really went with it. It really became about the green marble with the limestone and the balance of the masculine and the feminine in this neutral palette,” Ryan Korban, who codesigned the store with Alexander Wang, said. “The direction was about how are we going to take the rich heritage of Balenciaga and marry it with Alex’s aesthetic to achieve something that felt rooted in heritage but felt modern and new.”

The store may have been gleaming on Tuesday night but getting the space party-ready seems to have come down to the wire. “I came here last night,” Joseph Altuzarra said. The designer had misread his invitation and mixed up the nights. “I saw the rubble and I was like, ‘Wow, this is a really conceptual store.’”

Soon partiers skipped across the cobblestones to subMercer across the street for some after partying. “You’re going to have some real trouble down there,” an elevator attendant warned an exceptionally tall partygoer on the way down. “It’s a tight squeeze.”

Guests filtered into the low-ceilinged space (a few models had to duck down until they unloaded on a banquette) making the already-compact room snug. “I feel like I’m Alice and I’ve drunk that potion to makes me grow,” one guest cracked, seated in an even smaller room — a veritable cubby — off to the side. It had a stripper pole in it.

Alexis Dahan squired a gangly blonde around the party while Questlove set up behind the DJ booth.

Alexander Wang fluttered around the party, chatting up friends and bopping to the tunes.

“It’s kind of an abstract, surrealist kind of feeling of excitement until you actually see it and actually see the clothes from the collection hanging in the environment that it was created with,” he said. “It’s definitely a very exciting moment.”