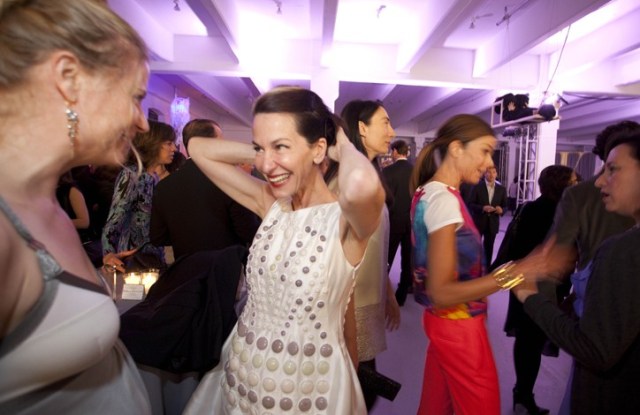 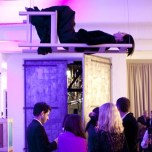 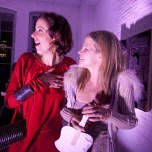 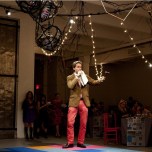 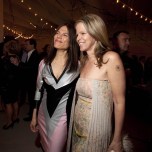 Slashes of lightning illuminated the cold, soggy scene outside Center 548 on Tuesday night, as would-be revelers huddled under umbrellas to wait outside the large steel door of the freight elevator. The only entry to the ‘do at hand was through the cavernous lift, which could have held comfortably a hundred people, and re-appeared every four minutes. Outfitted with a worn leather armchair and ropes of colored wires and crepe paper, the elevator was an art-space in itself, perfectly befitting the event to which it slowly raised its guests, Ballroom Marfa.

The benefit, hosted by Akris, W magazine and Casa Dragones, marked the first New York City-located auction for the Texas-based foundation, and the artistically inclined smart set turned out in droves to inspect the works that lined the walls (or suspended from the ceiling, in the case of Maria Jose Arjona’s endurance-performance). Yvonne Force Villareal and Cornelia Guest chatted with Doreen Remen nearby Hamilton Fish V and Harold Ford Jr., who peered at a small collage entitled “Peace, Muthafuka.” Villareal’s husband Leo (a co-chair of the event and one of the artists who had donated a work) mugged for photographers near his LED light and encrypted computer programming display, ‘Target.’ Fairfax Dorn and Virginia Lebermann, co-founders of Ballroom Marfa, enthused over the turn-out.

“We’re so happy to have all of our New York based board members here, together,” Dorn said with a smile. “It just made sense to have it here… Even though we’re Texas girls through and through. We just love Marfa, everyone should go at least once. Really, it’s one of the most amazing places in the world. Ever.”

One floor up, Sue Hostetler, Lela Rose and Ulla Parker greeted each other before sitting down to the banquet-sized, family-style dinner. Cynthia Rowley arrived in a flurry of praise for the young art world (“Love it,” she laughed), as ever, while Ahn Dong chatted with David Netto. Stuart Parr and Richard Phillips stayed in close conversation for much of the evening, ceasing only at Tori Praver’s arrival. Carlos Mota and Alison Sarofim had pored over the art lining the walls downstairs, but the latter shook her head and laughed when enthusiastic auctioneer Alexander Gilkes (from Phillips de Pury) attempted to raise the stakes from her end of the table.

“Careful with those hand gestures,” Gilkes joked. “That looks like a very Italian conversation. Be careful. Not wise to throw one’s arms about.” Stacey Engman, who had paired her inside-out Akris gown (“I just loved the lining!, Engman said of the colorful print.) with a foot-high electric blue fur hat, regaled her tablemates with woes of the time it takes to design one’s own jewelry: “Ages,” Engman confirmed, “Who knew?!”

The auctions (both live and silent) raised over $750,000 for Ballroom Marfa, to go towards continuing its programming, but dinner’s end meant coffee, dessert and dancing back on the second floor, and not tallying up one’s acquisitions. Andrew Wyatt and Pontus Winnberg of Miike Snow performed at the afterparty, and revelers shimmied and shook through the space; past the newly sold lots that still lined the walls and far under the completely still, silent Arjona, who lay prone in her horizontal, white wooden chair, twenty feet in the air, until well after midnight.