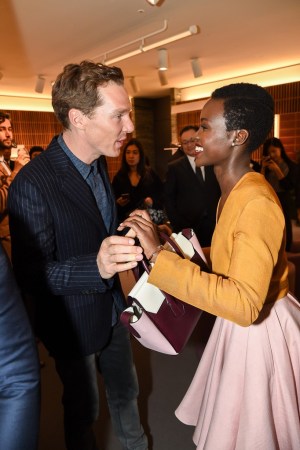 Evans, who has just wrapped a five-week press junket promoting his latest film, “Dracula Untold,” was enjoying a celebratory glass of Champagne at the Bally maison. But the actor stressed that he would keep any partying on an even keel after a recent encounter with tequila.

“I have realized, at 35 years old, that it’s just not good for you,” he admitted.

Bally chief executive officer Frédéric de Narp and design director Pablo Coppola, both of whom have relocated to London to establish the label’s creative and business base there, were on hand to unveil the new store.

“I’m so excited, sometimes I have to pinch myself,” said Coppola. “I can’t believe the store is finally done; it was not too long ago that we were looking at maps.”

“This store is the starting point of a new era,” added de Narp. “[Bally’s] creative input, spirit, energy and excitement are coming from London. This is the capital of fashion. It is becoming the hottest fashion city in the world, and we love this energy.”