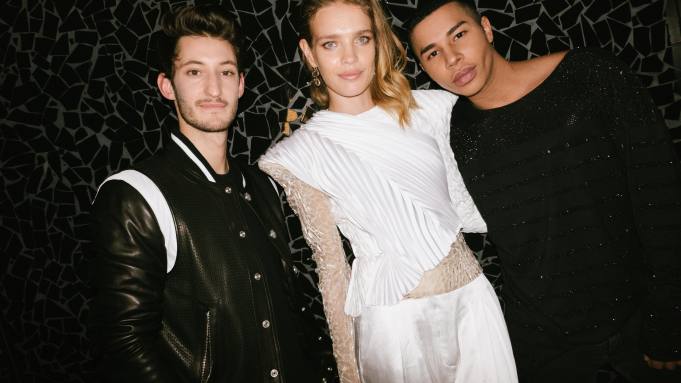 PARIS — “If you show up wearing Balmain, you own the party,” said Lottie Moss.

The 20-year-old model and half-sister of Kate was part of the youthful crowd that flocked to cult Parisian club Les Bains on Wednesday night to celebrate the launch of the brand’s capsule collection for German e-retailer Mytheresa.com.

Gesturing to her Balmain x Mytheresa white tweed dress, Moss, who will be dropping the second installment of her clothing line with Pacsun on Feb. 14, added that for her, the Balmain look was for “boss b—hes.”

Creative director Olivier Rousteing seemed to like the description.

“The Balmain woman is strong and believes in herself,” he said, stealing a quiet moment by the hotel’s famous underground pool. “She defies taboos and compromises. She can be controversial, but in any case, she really knows what she wants. That’s what I love about her.”

Additionally, the Balmain woman clearly loves to party. Guests danced to DJ Kiddy Smile’s retro R&B tunes. Naomi Diaz, the singer of the music duo Ibeyi, even took to the stage for a quick shimmy to Eve’s “Let Me Blow Your Mind.”

Models Natalia Vodianova and Noémie Lenoir, singer Ella Eyre and stylist Catherine Baba jostled among the throng of partygoers to congratulate Rousteing on the 10-piece capsule collection, which was inspired by Seventies disco and went on sale online on Thursday.

“I used to come to Les Bains a lot when I was younger,” said Rousteing of the club, initially born as Les Bains Douches in 1978. “This place has always been a huge inspiration. Some of fashion’s most iconic moments happened here. Flamboyance, opulence, Parisian chic — it has it all.”

It was Pierre Niney’s first time at Les Bains. Where does the “Yves Saint Laurent” actor go for a good night out?

“I’m always on the lookout for places that have some kind of spontaneity. It’s actually quite hard to find,” he said.

“There’s La Mano, although I haven’t been in a while, and the Bus Palladium. It’s quite old school, but some of the parties can be quite wild and unpredictable, which I like. But for me, the best spot for partying is at a friend’s home,” Niney said.

“Capsules are super important to us,” said the president of Mytheresa.com, which previously collaborated with Prada and Dries Van Noten on exclusive collections. “Nowadays with social media, when collections drop on our site, our fashion-loving customers have seen the pieces six months ago. You really need to invest in constant newness and freshness. And it’s also about the exclusiveness — it helps us position ourselves as fashion-forward.”

Mytheresa.com launched in 2006 as an e-commerce site for the Munich-based fashion boutique, which opened in 1987.

“Digital will grow in fashion, but physical retail will always be the majority of the business,” said Kliger, who stressed the importance of the customer experience — adding that this doesn’t necessarily have to be physical.

“We need to broaden what people mean by ‘customer experience.’ What is important is customer engagement. Last year, we launched customization projects with Gucci and Chloé, we did a fashion film with Miu Miu, music videos,” he said. “At the moment, we’re really interested in anything interactive, like ‘shop the video’ or augmented reality.”