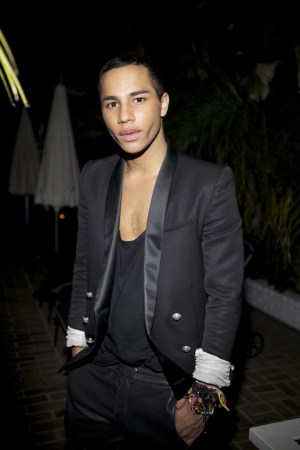 “I love the soul of L.A.,” said the designer. “It’s something that if you don’t come here, you can’t understand. I love the mix of art, history, nationalities. It’s something you’re not expecting.” What wasn’t unexpected was that a few guests would turn out in bold Balmain looks.

Richie, who is a longtime fan, obliged. As guests admired her intricate woven and beaded dress, she said, “I feel like I’m wearing a basket, but it’s OK for one night. It’s really all about the workmanship and the details.”

“I’m his number-one fan so I’m just very happy to meet him,” said Ross, who added that she was channeling “Star Trek” in her gold-piped teal dress.

“It’s my favorite, favorite, favorite, so for me it’s a massive honor to be here tonight,” she said. “I just met Olivier yesterday. We had a nice fitting and this was the third look I tried on — but then I stayed for two more hours and tried on everything in the room. It makes a really big difference when you can put something on and the outfit gives you an attitude and is emotive to you. What more can you ask for in fashion? That’s what it’s all about.”