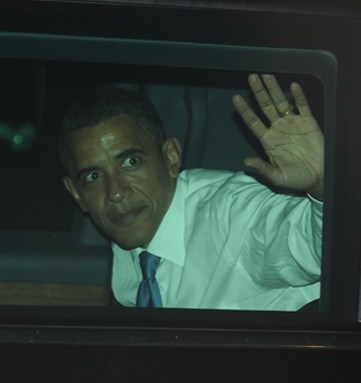 Call it the Sullivan Street Summit.

Perhaps the New York fashion crowd has a real fighting interest in the upcoming midterm elections. Maybe a few more anthropologically minded guests simply wanted to see what happens when the Head of State makes a social call on Anna Wintour. It could have just been a carry-over buzz from Chelsea Clinton’s impending nuptials.

Whatever the draw, political season came early to the West Village Wednesday night as a veritable all-star team of American designers attended a fund-raiser to benefit the Democratic National Committee at the Vogue editor in chief’s town house, where President Obama was the guest of honor.

So what did they all talk about? The event was private and closed, even to the Presidential press pool, and the 50 or so guests seemed to have sworn some sort of blood oath not to discuss the evening, even once it was over. Maybe they feared the wrath of their hostess (no covers, no Costume Institute invitations, no future mingling with the President).

“It was great,” said Tory Burch on the street after dinner.

“It was fantastic,” offered Andrew Rosen.

“I love Obama,” said Harvey Weinstein as he made his way up the street with Georgina Chapman.

Patrick Robinson seemed a bit more eager to talk at first, but had second thoughts at the behest of wife, and Vogue staffer, Virginia Smith.

“It was amazing,” a smiling Robinson settled on as he turned to join Smith in their walk across Houston Street.

What could be gleaned from whispers is that the event was very intimate with about five to six tables. Obama sat briefly at each table — which must have made eating tough — and was charismatic and upbeat. The entire mood of the evening was “rally round the party” which, given the pressures the Democrats are facing, could use a lot of help.

And, financially, the evening was a hit. Each of the attendees gave up to $30,400 — the maximum total donation this election season — for the chance to hold court with the President. Though it’s unclear if every guest pledged the full amount for the dinner, those doing the math at home will note that the upper range of Wintour-plus-Obama equals somewhere near $1.5 million. The final tally will have to wait until the Federal Election Commission updates the disclosure sheets. But it puts Wintour up there in the million-dollar fund-raising club, meaning that if she wants that ambassador’s job as an exit strategy from Vogue, it just might be hers (although probably not London’s Court of St. James’, which generally goes to really heavy hitters. Maybe Luxembourg?).

The Secret Service and New York Police Department started prepping the neighborhood with metal barricades as early as 9 a.m. Wednesday, and by late afternoon, a crowd of agents and officers had flooded the area. The security arrangements required partygoers to traverse the block on foot and enter the house through a collapsible tent set up ahead of the front door. André Leon Talley and Shelby Bryan (who had the strange honor of being frisked on the way into his own home) were among the early arrivals, as was Vera Wang, possibly taking a break from last-minute work on Clinton’s wedding dress. The full scrum, which included Donna Karan, Calvin Klein, Burch, André Balazs and Diane von Furstenberg, had made its way into the house by 6:20 p.m., a full hour ahead of the President. When the motorcade did arrive, right on schedule at 7:20 p.m., the presidential limo pulled into the awaiting tent, which Secret Service agents promptly drew closed. Onlookers hoping for a closer glimpse of the most anticipated arrival of the evening were left waiting until the next election cycle.

The fete didn’t go completely undocumented, though, as Wintour employed her own photographer to capture the evening. And the dinner conversation must have been stimulating, since the man of the hour partied late — relatively speaking — and stayed a full half-hour longer than planned. He finally hit the road around 8:50 p.m., which was when Air Force One had been scheduled to take off from Newark, at least according to the official White House day planner.

The time his plane was due to take off was almost the only detail released about the evening — which seems to be a trend with the Obamas lately. Quite a stir was created earlier this week when it was revealed the First Lady would make an “official” visit to Spain. On Thursday, Katie McCormick Lelyveld, press secretary to Michelle Obama, disclosed the first family will pay for part of that trip next week with daughter Sasha out of its own pocket because it is considered “private.” The only official part of the visit, funded by taxpayers’ dollars, is Obama’s audience with King Juan Carlos and Queen Sophia of Spain. How much of the tab the government will pay for the Secret Service detail, particularly if Obama and her entourage stays at the Villa Padierma, a five-star hotel near Marbella where rooms are normally priced at 3,300 euros, or $4,285, as local media reports indicate, is still a question mark. McCormick Lelyveld said the First Lady will be traveling with a “minimal staff” and the office doesn’t discuss security issues.

Whatever, it’s some summer holiday spree for the Obamas —Maine, then Spain, then the Gulf Coast (to help pump up tourism) and finally Martha’s Vineyard. Those books must be selling really well.