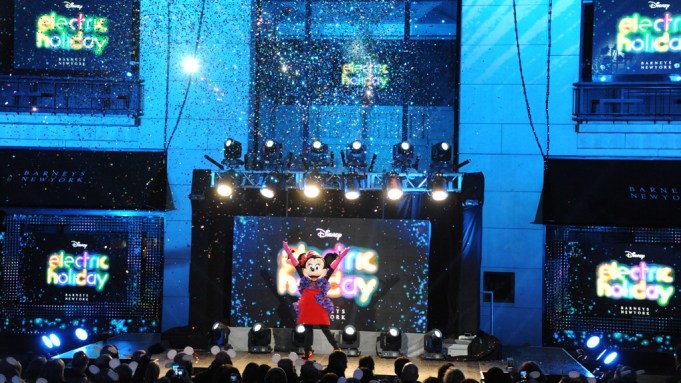 From the masses in light-up Mouseketeer ears to the abundance of Mylar confetti to the lone mother navigating crowd-control fencing in search of a restroom for her son, passersby would be forgiven if they mistook the block of Madison Avenue between 60th and 61st Streets for certain portions of the Greater Orlando area on Wednesday night. So what if the former gymnast type in skin-tone tights and fairy wings cheerleading onstage was in temperatures not usually navigated by Tinker Bell? Her professional perk was still 100 percent theme park-ready.

This was the much-awaited unveiling of Barneys New York’s Disney-themed Christmas windows, and the store had successfully turned its little corner of the Upper East Side into Main Street, USA for a night. Dubbed “Electric Holiday,” the campaign’s centerpiece is an animated short featuring Minnie, Mickey and the gang alongside a string of high-fashion familiars, from Alber Elbaz to Suzy Menkes. A few hundred people lined the closed-off street for its premiere on the store’s facade.

“I jumped at the chance especially because I watch so many Disney films currently,” Linda Evangelista said during an in-store cocktail party before the official unveil. As her son fidgeted with a knapsack at her side, the supermodel noted that this was her second turn as a cartoon character. Harper’s Bazaar had her “Simpsonized” for an editorial a few years ago. How did her Disney avatar stack up?

“Not what I was expecting, but…fun,” she said. “Whatever.”

RELATED STORY: From the Magic Kingdom to Madison Avenue >>

A few feet away, the blogger Bryanboy, also a character in the short, was sporting a pair of black mouse ears. They were his own.

“It’s still surreal,” he said. “A lot of the Disney films, a lot of the Disney cartoons really represent magic. For me, it’s the same thing with fashion. I didn’t expect to be where I am now or to be surrounded by great people, so it’s magical.”

Walt Disney Co. chairman and chief executive officer Bob Iger stood amid the Day-Glo swirl in a three-piece suit and polka-dot tie. He was on hand to cohost with Sarah Jessica Parker and Barneys ceo Mark Lee. “I think it says so much about these characters, that they can exist in what I’ll call a normal person’s world but also in high fashion…,” said Iger.

“I don’t want to suggest that people in fashion aren’t normal people, but, you know,” he continued. “It’s very sophisticated. Very high end. And I love that.”

Of course the Disney characters are both beloved childhood icons and the public totems of an international media conglomerate. And the marriage of Disney to Barneys’ occasionally edgy fashion was not without a fraught moment or two. Upon the initial unveil of the “Electric Holiday “concept art in September, a vocal segment of Disney-philes decried one size-zero fantasy rendering as “Skinny Minnie.”

“People love these characters and when they see Minnie and her pals in this, they’re going to love them just the same,” Iger said with confidence. “Nothing that has been done would in any way suggest that either the characters have changed or that they have in any way lost their wonderful appeal to both kids and people all over the world.”

The New York crowd seemed to agree. The largest cheer of the evening came when the animated Minnie, care of some pixie dust, stretched to sample-size and paraded her Lanvin dress down the runway.