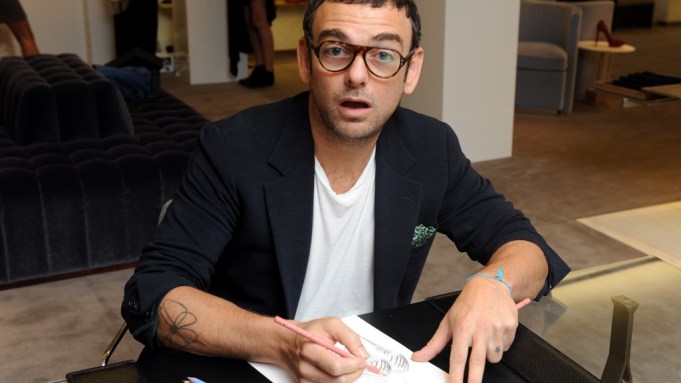 On Wednesday night, immediately following a Rapture-like hailstorm in Manhattan, Barneys New York threw a cocktail party to celebrate its new shoe floor and “Perfect Pairs” campaign. From July 16 through July 22, Barneys is donating 10 percent of shoe sales to the Human Rights Campaign and its Americans for Marriage Equality program. Cartoon silhouettes of heels and brogues decorate the windows on Madison Avenue.

The new shoe level is airy and bright and spacious, with extra attention paid to the men’s section. It is the first time, for Barneys, that women’s and men’s designer shoes will be housed adjacent to one other on the same connected floor. Rachel Chandler circumnavigated the party solo, phone held out in front of her like a compass: Barneys had employed her to take Instagram photos on her iPhone of guests, who could print out their portraits on a small set of color printers secured to a far wall. Near the printers was a glass desk beautifully laid out with a leather stationery set, several different styles of markers, pens and pencils and an impressively intricate pencil sharpener. It had an aperture adjustment, and was secured by suction cup to the desk. “Oh, we flew all this in from Italy this morning,” a Sergio Rossi rep explained, “Francesco is very specific about his tools.” Francesco was Francesco Russo, creative director of Sergio Rossi. He had offered to draw a personalized sketch for every pair of Sergio Rossi heels sold the night of the party. The tools were for that.