The actress hosted a dinner in honor of the designer's debut collection at the retailer on Tuesday. 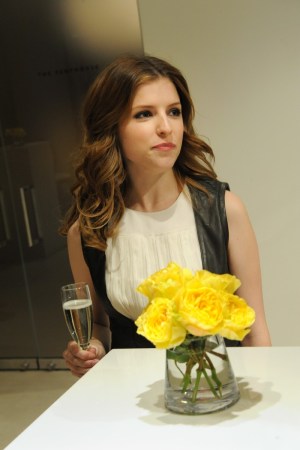 Marissa Webb was in a bit of denial on Tuesday evening. “I don’t want to even think about it, ” the designer said at a dinner held at Barneys New York in honor of her debut line. It was 10 days until the former J. Crew designer’s sophomore namesake collection would be unveiled at Lincoln Center, but the impending ready-to-wear season was not on Webb’s mind. “I’m not counting the days because it’s coming too fast,” she said. “Tonight, I just need to relax.”

The crowd — a mix of editors, models and Barneys folk — convened on the store’s fourth floor, where mannequins bedecked in Webb’s spring collection scattered about. Tumblers of spicy margaritas (Webb’s drink of choice) awaited, and trays of truffled grilled cheese and tuna tartare dolloped on Parmesan crisps beckoned. Webb fiddled with a watermarked plaid-print pencil skirt on display: “I can’t help it! I want everything to look perfect!” Nearby, Emily Senko, Ajak Deng and Grace Mahary exchanged Instagram handles over prosecco. “They’re like Amazons!” Webb cracked, mugging with the long-limbed models for photographers. “This isn’t fair. Can someone pick me up or something?”

A beaming Anna Kendrick, hostess of the soiree, held court with Mark Lee and Daniella Vitale in one corner. “When I put on the dress, I was like, ‘OK great, this looks incredible. I’m done,’ but then Marissa said, ‘There’s a leather vest that goes with it,’ and I was like ‘Ehhh,’” the actress said of her look, an ethereal cream chiffon frock paired with said vest. “But then I put it on and I totally got it. Somehow the juxtaposition makes sense. It’s totally counterintuitive, but that’s why it works.”

Kendrick hadn’t had face-to-face time with the designer until just recently. “We were like e-mail pen pals for a while, but we didn’t get to meet in person until last night,” the actress said over dinner. “We didn’t start trying on clothes until like 10 because I kept taking pictures of her three dogs. She has this one pug that can’t keep his tongue in his mouth. It’s a whole situation.”