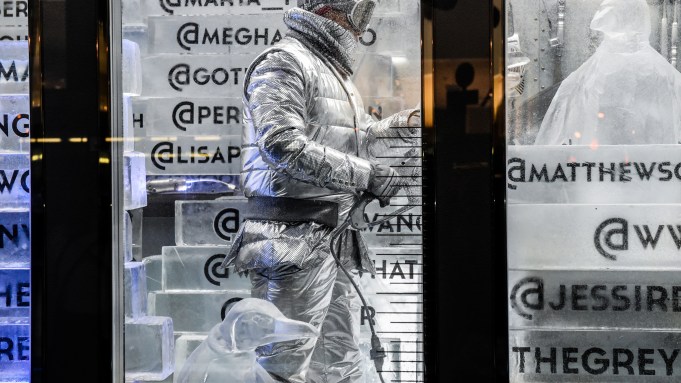 To New Yorkers, nothing equates with the holiday season quite like bitingly cold temperatures. Barneys New York brought the big chill early this year with the Tuesday night reveal of their holiday windows, conceptualized around the theme of “Chillin’ Out.”

Though the phrase manifested itself (display-wise) in purely the temperature sense, what with frosted windows and various iterations of ice, the secondary meaning (that of the relaxing sense) seemed to be embraced at the brand’s celebratory “dinner.” Upscale TV dinners were handed to attendees (mostly editors and Barneys brass) on the store’s fourth floor, bedecked in low-seated white sofas and faux fur throws.

“We pushed ourselves to the limit on this one,” said Barneys creative director Dennis Freedman. “Where we tested ourselves was to technically create ice lockers. That’s huge; I’m pretty sure it’s never been done before.”

“It’s the first time I’ve done holiday windows,” Dale Chihuly said of his contribution of five glass sculptures, “put together, and then lit up with fancy lighting that allows them to change color,” the Seattle-based glass artist said, adding, “plus, there’s water on the bottom.”

After the TV dinners, the crowd poured out onto 60th Street, hot cocoa in hand, for the grand reveal. The four windows were done in partnership with four collaborators: Arctic Chase, done by Lexus; Winter Brilliance, featuring commissioned Chihuly sculptures; Ice Castles (much as the title suggests), and Ice Carvers, which featured a man inside the window slicing away at a block of ice with a chainsaw.

Two display windows (the Ice Castles and Ice Carvers) have been turned into 35-foot ice lockers and kept at minus-2 degrees, which, safe to say, is a first for Barneys. “It’s a company that works on mountain tops, and we told them that we wanted to do it on Madison Avenue,” Freedman said of Ice Castles, the Utah-based company behind the frozen windows. The ice carvers will perform daily during the coming weeks. “They thought we were crazy.”

“I can’t get over the first one,” said Lisa Perry, wife of Barneys owner Richard Perry, of the Ice Carvers display, a likely favorite as much of the crowd’s social media handles were etched in ice.

After ducking back inside for a spot of white chocolate fondue, guests made their way home in on-demand Lexuses with their very own shot-ski (the contraption is much like it sounds — a hybrid of a mini ski and a line of shot glasses), personalized with their social media handles. Chilled out, indeed.