The department store and DVF teamed to fete the emerging jewelry designer. 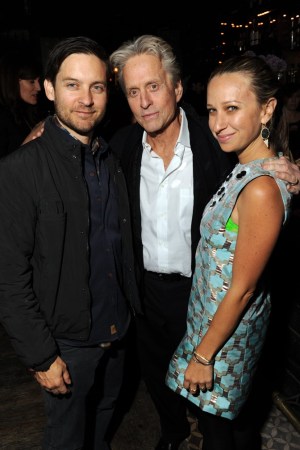 Barneys New York and Diane von Furstenberg started the New York Fashion Week goings on a few days early by hosting a dinner for fine jewelry designer Jennifer Meyer at La Esquina Monday night. Meyer outfitted herself in a teal and brocade DVF shift with large glass paillettes and a slew of her pieces, like diamond bangles, a vibrant emerald-green cigar band and a cuff made from an 18-karat gold stick of hand-pavéd diamonds with two trillion accents on each end. She wore yellow-gold earrings with micro-pavé diamond-bordered green sapphires with a pavé diamond triangle drop.

“I have a lot of [my] new stuff sprinkled in,” Meyer said, noting that she’d taken many of her signatures — like dainty leaves, wishbones, hearts and letters — and embellished them with elements like pavé diamonds, flashing an entirely diamond-encrusted heart pendant containing a hand-cut turquoise arrow with a single ruby “drop of blood” placed below it.

“Is it expensive?” Graydon Carter asked Meyer, admiring baubles that were being carefully watched over by a bodyguard.

Von Furstenberg, Meyer’s Council of Fashion Designers of America-supplied mentor, congratulated her charge for being named a runner-up (along with Tabitha Simmons, also in attendance) for the CFDA/Vogue Fashion Fund last November.

“I’m the one who cares about the jewelry. They send the jewelry people to me,” von Furstenberg said of the CFDA.