By Ericka Franklin on May 5, 2016
View Slideshow 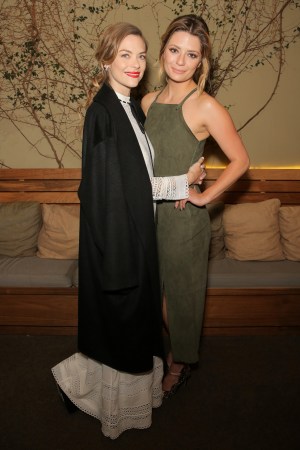 On Wednesday night at Lucques restaurant in West Hollywood, the farmhouse tables on the patio were set with personalized illustrations by Justin Teodoro to welcome a small flurry of guests coming to celebrate the launch of Los Angeles designer Robert Rodriguez’s R/R Studio collection for Barneys New York. The designer was also raising a glass to winning back the rights to his name.

“It feels like I got my baby back,” Rodriguez said. “Every designer wants their name. Unfortunately, it was something that I lost and it makes me feel complete that I got it back.”

Rodriguez chose Jaime King as his celebrity hostess for the evening, saying, “The collection is just her, and it’s her personality that comes out when she wears it. She’s carefree, easy; she’s my customer and she’s who I want to dress.” King echoed his sentiments saying, “I saw it as an opportunity to work with someone who is authentically me; that resonates as someone who loves fashion and cares about it in a way that he does.” The only request King had was bringing along her “ride or die” Lydia Hearst. Also in attendance were Barneys’ Daniella Vitale, stylist Jessica de Ruiter, Kyle Newman, Mischa Barton, Natalie Joos and new Angeleno Mary Charteris.

Barton, has made a comeback of sorts since her days as a child star and a teen “The O.C.” sensation, both acting and producing. Her next film, “The Pilot,” which she’s also producing, is based on the making of “Star Trek” in the Sixties and costars Rosario Dawson,  Kevin Connolly and Judy Greer. She’s also pitching a television show, called, ironically, “Pitching Town.” Said Barton, “I’ve been in this business forever and I’ve been wanting to do some things I know intimately, maybe too intimately. Sometimes you wish as an actor you could close your eyes and not see any part of that because it takes the fantasy aspect away, but I kind of know what needs to be done. I’m good at putting people together, too. I have friends [from] all walks of life.”