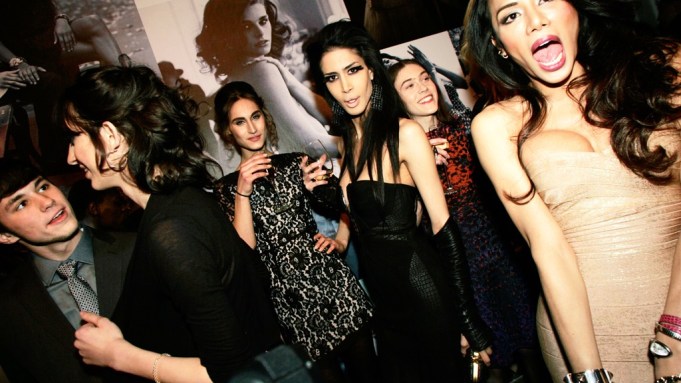 “Ow, ow!” and various iterations thereof were interspersed during the 35-minute Weber-lensed video, which premiered at the dinner and was shot in conjunction with the retailer’s “Brothers, Sisters, Sons & Daughters” spring ad campaign featuring 17 transgender men and women.

The models, seated at the center of one of the four long tables occupying the room at 18 Wooster Street, were the focus of the film, which splices shots of transgender men and women vogueing at the Marc Ballroom in 1983 against footage from the 2013 campaign shoot. It also integrated the models’ own touching personal stories of transition and triumph. “We knew from the beginning it would be more than just photographs. We wanted to tell their stories and no one tells stories through photographs better than Bruce,” Dennis Freedman, Barneys’ creative director, said.

The Eurythmics’ “Sweet Dreams (Are Made of This)” floated through the room, which grew snug with the likes of Charlie Rose, Mario Sorrenti, Monique Péan, Sean Avery, Reece Solomon, Irene Neuwirth, Cornelia Guest, Rachel Feinstein, Pamela Love, Derek Lam and Jennifer Fisher. Photographers swarmed as the 17 models assembled. The group sassed it up, blowing kisses and hair flipping.

“We bonded right away,” said Valentijn De Hingh — a slim stalk of a woman with a delicate septum ring dangling from her nostrils — one of the models featured in the campaign. “Like right off the bat, I remember the first ride from the hotel to the studio to shoot, we were actually already talking about where we were in our transitions and how hard the transition was. This experience has bonded us so deeply. I have friends all over the world now.”