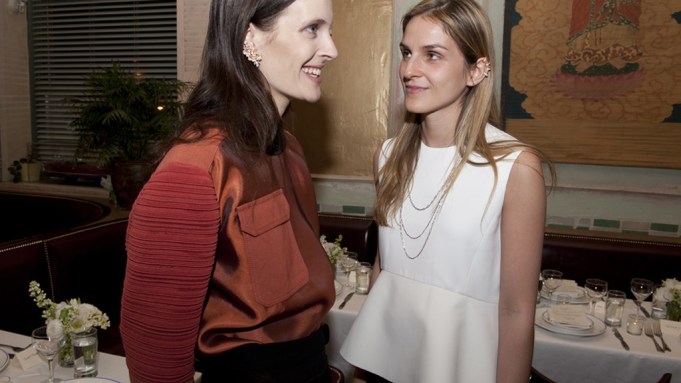 Fashion magazines are perpetually attempting to dissect the carefree, undone chic of Parisian women for their American readership. And though Gaia Repossi, the artistic director of her family’s jewelry company, may be Turin born, she certainly looks the part, as she did at a dinner held in her honor by Barneys New York at Cafe Gitane’s West Village location on Thursday night.

“Gaia is very cool,” Alexander Wang said, as Repossi circulated through in a white peplum Celine top and a few pieces from her line.

“I’ve always been a minimalist,” the jewelry designer continued of her personal style. “I like jewelry to be strong and stand out.” Repossi has designed jewelry to accompany collections for Wang and Joseph Altuzarra, and her baubles adorned the arms, fingers and earlobes of several of the evening’s guests. Jen Brill wore one of the ear-spanning diamanté clips that give the effect of having four or five piercings up the ear’s cartilage.

The dinner had the feel of an informal gathering of friends, with Dree Hemingway, Tom Guinness, Max Snow and Vanessa Traina sharing slices of avocado toast and oversize plates of chicken satay. “Yes, so many friends [are here]….Dree often wears our pieces,” Repossi said, ensconced in a banquette near Wang and between Harry and Peter Brant Jr., who table-hopped, “and Vanessa is very inspiring to me. She has a unique androgyne beauty.” Traina was one of the evening’s co-hosts.

As dinner wound down and talk turned to topics other than precious metals, Fabiola Beracasa had the latest issue of Playboy in her purse, signed by cover girl May Anderson. “She was signing them earlier at the Hole ,” Beracasa explained. “Do you want to see it?”