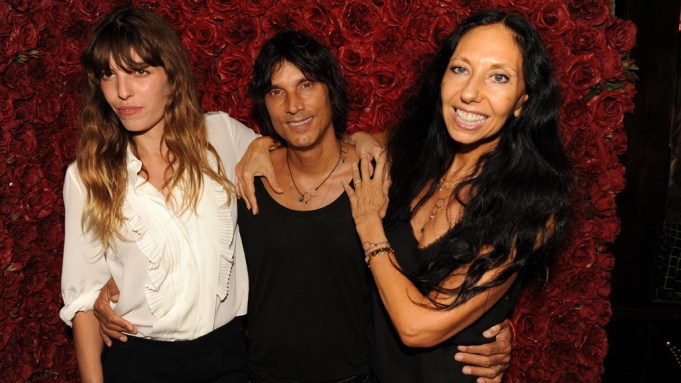 Lou Doillon plopped down on a plush couch at the Jane Hotel on Tuesday night in a ballroom packed with fashion types. Barneys New York was throwing the party to celebrate its fall marketing campaign, which features the singer, actress and model with a life-size marionette version of herself. Inez van Lamsweerde and Vinoodh Matadin, who shot the advertisements, sat next to her.

“Throughout my life — which has been up and down in many things — the only thing that always stayed up like a star somewhere was those two, who always call me up to do the most bee-ah-yoo-ti-ful projects in the world,” Doillon said. “It’s like strange fairies.”

About half an hour earlier, Doillon had performed a low-key acoustic set for the crowd. Though she held her own — eliciting some serious-faced camera phone operation from Elizabeth Gilpin and Leigh Lezark in the front row and a lip-sync-along from Pamela Love — by her third song, Doillon had met the fate of many a fashion week performer before her: a chatty crowd. Sensing that a daughter of Jane Birkin might have some thoughts about how to prepare for an audience stacked with fashion folk, WWD asked about her preshow process.

“Well, you think that if worse comes to worst, you can shoot yourself the next day, which is an option,” she said.

“And then you think, well, you know, I’m not a brain surgeon and I’m not a pediatrician,” Doillon went on. “What I do has no dramatic responsibility. So you try to calm down, thinking you won’t kill anyone, and you won’t hurt anyone.… All you have to do is remind yourself that you have been the girl drunk at that party who wasn’t listening, so you’ve got to think about that. It’s complicated. Most of the people here have been working since 8 o’clock this morning, have got lots of things to tell each other, haven’t seen themselves maybe for one season. So you’ve got to keep it a bit short, and at the same time, you can also break the spirit! I mean, if I was doing dance music, it would maybe be easier. For me, it’s a lot of fun to come with very strange songs and say, ‘Listen, guys, we’re going to break the whole ambience with an acoustic guitar.’”

Earlier in the evening, partygoers at the Urban Zen Center contended with a completely different ambience. Dom Pérignon had taken over the space to launch the recent bottle design it commissioned from Jeff Koons, and gave the room a lush, Adventureland-worthy makeover via several hundred plants. The jungle-esque trappings extended to the temperatures, but there was, at least, plenty of Champagne on hand to help cool attendees down or numb them entirely.