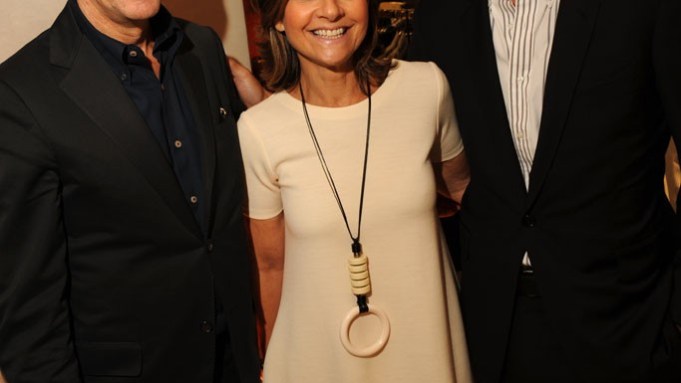 NEW YORK — Barneys New York celebrated the renovation of its men’s sixth floor by giving back.

Mark Lee, chief executive officer of the retailer, teamed up with New York Rangers goalie Henrik Lundqvist and UNICEF chairman David Sable at an event they billed as Man Up. Those stopping by to sip artisanal cocktails from Employees Only and watch an artisan create hand-rolled cigars got the first look at the store’s revamped European designer brand presentation. But it wasn’t all just smoke and sips — 10 percent of all proceeds from the evening were donated to the U.S. Fund for UNICEF.

Lundqvist, who is known for his personal style, actually had to peek inside his sport coat to check the label — it was Andrea Campagna. “I like the fabric and the fit,” he said. “The brand name doesn’t really matter to me. It’s more about having a great tailor. And I like to explore and try different things.”

It won’t be long before Lundqvist will have to replace his designer duds with a uniform and pads, but he’s ready. “We spent two months in Sweden, and it’s time to get back [to work],” he said. “We start training camp in two weeks. It’s going to be an exciting season, and it’s great to be back in New York. We have a new forward, we’re going to be playing an outdoor game at Yankee Stadium and it’s an Olympics year.”

Barneys chairman Richard Perry and his wife, Lisa, also stopped by, along with Michael Bastian, Maria Cornejo and Mason Plumlee of the Brooklyn Nets.

Vendors with brands at the newly renovated department made an appearance, including Massimo Bizzocchi of Kiton and Graziano DeBoni of Armani. DeBoni was seeing the redesign for the first time that night and liked what he saw: “I always go with my first impression, and it really looks great. We have great shop positioning here and our business is good.”