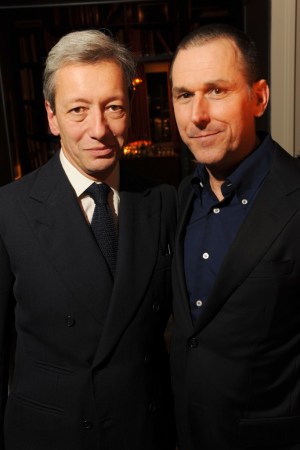 “What is that? Carnal Flower? It smells heavenly in here,” one guest, with a particularly discerning nose, wondered aloud while plopped down on a citron armchair in Mark Lee’s lofty prewar penthouse on Thursday night. Considering the occasion, a Barneys New York-thrown dinner toasting master perfumer Frédéric Malle on his decade-long tenure with the retailer, the ideal scene-setter had to be the ambrosial scent, Malle’s best-selling eau.

Brand devotees shuffled around the Chelsea abode, nibbling on the passed canapés — foie gras on brioche rounds, mushroom crostinis with rosemary aioli and grilled artichokes wrapped in pancetta. Some sat around a trio of cocktail tables, slabs of selenite and teak, atop which rested bowls of bite-size gougères. “Something like this,” Irene Neuwirth said speaking to her own olfactory proclivities. “Something that’s not too sweet. I like something that’s a little more masculine.” Fragrance preferences aside, cocktail chatter among the attendees centered on the much-discussed and sublimely outfitted space in which they stood — “I want to pretend to go to the bathroom just so I can look around,” one partygoer confessed — and the impending chicken-potpie supper.

The man of the hour worked the crowd, reflecting on his brand’s ten-year stretch. “It’s gone so fast. I feel like it was just yesterday that I started. It’s a very strange feeling,” Malle said. The perfumer spoke of his relationship with Barneys, likening it to another type of relationship. “It’s been really like a marriage, a marriage where we still communicate very well. They listen to me, are very honest,” he said. “We still bring out the best in each other.”

It seems Malle grew very fond of the analogy as the night carried on. After a toast from Mark Lee, in which he said, “At Barneys, we have stars and we have superstars. Frédéric is a superstar,” the perfumer piped in, “Put it this way, we’ve been a great couple for ten years. And we still have a very strong intimate life.”