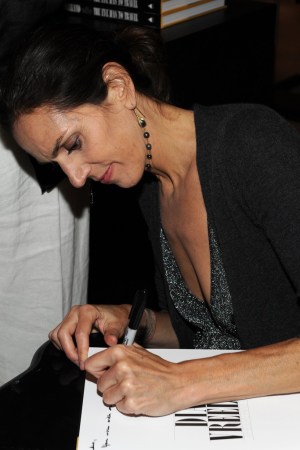 Revelers swilled Champagne and surveyed inspirational Vreeland quotes (“You don’t give people what they want, you give them what they never dreamt they wanted”) painted on black panels and old Vogue covers.

This story first appeared in the September 16, 2011 issue of WWD. Subscribe Today.

Grace Mirabella and Immordino Vreeland were both on hand, signing copies and greeting fashion-industry fans like Monique Péan, Amanda Hearst and Zani Gugelmann.

Machado and Tree chatted near a framed image of Twiggy, whose eye was emblazoned with gerbera-daisy face paint. Both of the style inspirations paused when asked about the era of Vreeland and their days as models.

Tree, wearing a long silk coat with a swirling paisley design, laughed at the question: “Lots of people are nostalgic for a time they didn’t experience — I don’t miss it too much, but sometimes, sure, I do wish I still looked like that. It was fun.”

Machado murmured agreement before being pulled away to speak with her daughter.

Klein was also at the party as a host, though he hadn’t yet read the book.

“I’ve admired it, I only received it this morning,” Klein explained. “I’ve been assured it’s a really interesting read, which is rare for a book like this. It’s not just the layout, it’s really supposed to be very well written, well researched. And there’s going to be a documentary. It was just picked up in Toronto. It has something like 40 hours of unaired footage from interviews with Diana. It’s interesting: That magazine was going through tough times then. It wasn’t vital by any means. It was an interesting time, an iconic time.”