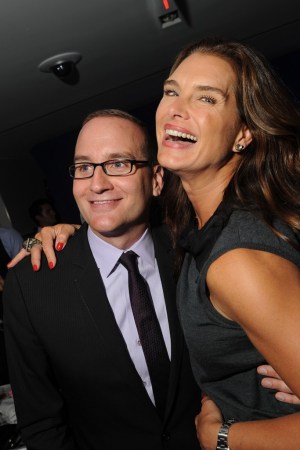 “I did not wear these shoes,” Quinn said, pointing down to the bright pink mock croc Jimmy Choo heels she had purchased, proudly, at an end of season discount. The prospective 2013 mayoral candidate had just returned from the Democratic National Convention in Charlotte, which had been a walk-heavy affair.

“I usually wear heels to work,” she said. “You just can’t [at the DNC]… The first day I had a pair of heels in the bag and I tried a little switching. The second day I had a wedge and I cried ‘uncle’ at about one o’clock and went for just a flat beachy sandal. And the third day I didn’t even try to bring another pair of shoes. I just went right for the [flats].”

To Quinn’s right, was a wall of suede Marni heels, and beyond that two large cube-like displays of Louboutins and Manolos. In between, a cocktail hour crowd that included Narciso Rodriguez, Tabitha Simmons, Pierre Hardy and Sean Avery chatted and sipped passed Champagne. Upon opening the plushly carpeted space in July, Barneys had run a series of “Perfect Pairs” promotions and fundraisers that saw a percentage of sales donated to the Human Rights Campaign, the LGBT public advocacy nonprofit and lobbying group. Friday night’s dinner party on the fifth floor itself — co-hosted by Quinn and her wife Kim Catullo, Brooke Shields and husband Chris Henchy and Barneys chief executive Mark Lee and partner Ed Filipowski — marked the culmination of the campaign, which Lee announced, had raised more than $340,000.

As the ongoing national election season has shown such acts of corporate citizenry can work both ways, though Quinn sounded unbothered in the progressive-friendly environs of the Barneys shoe department.

“Corporations, stores, exist in the world and they exist in the communities they’re in and they exist in this country,” the speaker said. “I think it’s great when they can lend their voice, their space and their money to important philanthropic efforts. Whether they be ones like this, that are very political, or charitable ones.”

After cocktails, guests were ushered through a long hallway to a dining room, where, in keeping with the night’s theme, table assignments included “Fred and Ginger” and “Mickey and Minnie.” Dinner was surf and turf; dessert was peaches and cream. The theme was so persistent, in fact, that when Estelle performed later at a stage in the center of the room, she looked a little lonely at first. Simon Doonan quickly remedied the situation, joining the British singer on stage for some animated dancing.

As the crowd filed out a little after 11 p.m., waiters passed peanut butter and jelly macarons.