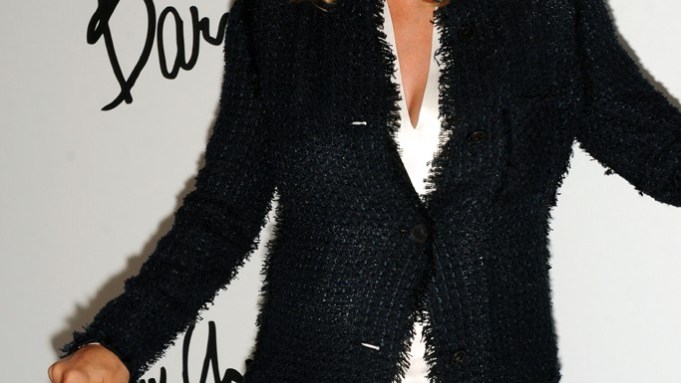 There was a familial feel in the air at the Lanvin presentation at Barneys New York on Thursday afternoon as the retailer feted Alber Elbaz’s 10th year at the label with a noontime luncheon.

“It’s a strange thing to look back on, 10 years,” Elbaz mused before the show near a chandelier bestrewn with some of the line’s jewelry and trademark loose velvet bows (echoing the black one tied around his neck). “In fashion, one year you’re in and the next you’re out. So 10 years is certainly something.”

A noticeably pregnant Uma Thurman co-hosted the event, largely to draw eyes to her charity Room to Grow, a nonprofit dedicated to enriching the lives of babies born into poverty through the first three years of development. Ten percent of proceeds from Lanvin sales on Thursday were directed to the charity.

“I have to speak, a little speech,” Elbaz explained. “We are not all as good at delivering lines.”

The presentation drew guests like Katie Lee, Adelina Wong Ettelson, Lisa Airan and Giambattista Valli. “There used to be a time in fashion when we all hated each other and would send nasty messages,” Elbaz later said of Valli. “Now we all send flowers, well, I send a cake or macaroons, but there’s a great respect between all of us.”

The night before, Barneys chief executive officer Mark Lee had hosted an intimate dinner for Elbaz at his home, where no less than three miniature disasters had apparently taken place. “Oh, the wind knocked a piece of art off the wall, a toilet overflowed, a cake with sparklers set the alarm off and a fireman came…but I was just so touched that Mark had us at his home,” Elbaz explained.

“Barneys is a very emotional place for me,” the designer said, addressing the room. “Eighteen years ago I met my partner here, on the third floor, and we’re still together.…In our first season, Barneys came and then left after 15 minutes and they said ‘We’re not able to buy Lanvin because you’re not prepared, you don’t have the prices, some dresses aren’t finished.’ When I heard that, I ran after them with a bouquet of flowers that had been on my table. I said, ‘I’m sorry, please come back, we’re not ready, it’s our first-ever show,’ and since then, family was Barneys and Barneys was family.”

Introducing his collection, Elbaz said, “We took a lot of tradition and know-how and it’s almost like California cuisine. We take the tradition, but we take off the butter and replace it with olive oil. The house of Lanvin is the oldest couture house in the world. And so I took some old pieces and remade them to be relevant: and that’s what it’s about. Being relevant, being comfortable and being beautiful. Because there’s nothing intellectual about a red dress, and there’s nothing intellectual about a roasted chicken. It’s just beautiful.”

Elbaz continued, reflecting on his early years at the house: “I remember this woman came and told me, ‘Every time I wear Lanvin, men fall in love with me,’ and I said to her, ‘I want you to wear Lanvin and fall in love…be more active, don’t let go, don’t just be waiting for someone to fall in love with you, you have to do it.’ These are the women I love.…Women today are not what they used to be. They’re not just beautiful creatures. I always used to say that women are strong and men are powerful. Power you can buy at the bank, you can lose it at the bank. But strength is internal. Women now are not only strong but also powerful, and this is a deadly combination. These are the women that we’re dressing. I ask day after day, ‘What is it that we want, that we need?’ What we’re looking for more than anything is to be loved, to be hugged, to be with people who we feel comfortable enough to sit and be silent with when we’re tired, and that’s what we’re trying to do at Lanvin. To bring you love.”

Gauging by the crowd of friends and admirers who besieged the designer postshow, the feeling was mutual.