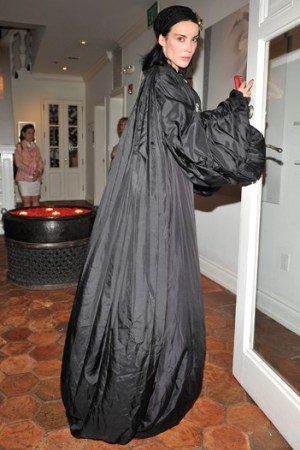 Though the economy is still in the doldrums, Art Basel Miami Beach’s party schedule showed no sign of relenting over the weekend.

“I try to make it to four of the five dinners every night,” said Becca Cason Thrash at an early commitment in her packed Friday night schedule: a cocktail for Viktor & Rolf at The Webster. (For most, that wasn’t their first stop on the circuit: Bruce Weber had a jam-packed book signing at The Standard hotel for his tome on dancer Roberto Bolle, while to the north, Lanvin celebrated the opening of its Bal Harbour boutique.)

Fair newbie China Chow, whose pop Michael recently opened a Mr. Chow in South Beach’s W hotel, was getting a crash course in the art market. “I’m learning to not be impulsive, because [the dealers] can be quite pushy,” she said.

Designer Rolf Snoeren picked up a Justin Cooper sculpture before he and Viktor Horsting hit a wall viewing art. “At a certain point, you have to stop,” said Horsting. “Now, we are having lots of Champagne.”

Next up was a dinner hosted by Remo Ruffino at Casa Tua to celebrate Moncler’s collaboration with Pharrell Williams. The multitalented music man was modeling one of his vests, which resembled something that might be in a law-enforcement officer’s closet.

“Is this it?” asked his friend Naomi Campbell, who arrived with a bodyguard and boyfriend Vladislav Doronin in tow. “It’s brilliant.”

After dinner, partygoers headed to the W hotel’s Wall nightclub, where Sante D’Orazio was feting his latest book, “Barely Private,” with Francesco Clemente and a bevy of models, while others hit the Visionaire party on the roof of the Delano hotel. Diana Widmaier Picasso cohosted a performance art-packed party at The Raleigh for guests like James Franco. to mark Klaus Biesenbach’s appointment as director of P.S. 1. (Some mistook artist Ryan McNamara’s dance as an impromptu outburst from a drunken guest.) As the finale, Terence Koh led everyone out to the beach, where guests had drinks in preparation to finish the night at Le Baron’s party in the Delano’s Florida Room.

The next night, those who were still in town had a cocktail with designer Joseph Altuzarra at The Webster before heading back to Casa Tua for an A. Lange & Söhne dinner in honor of India Hicks, their brand ambassador. Also there were Elle Macpherson and new beau, Fontainebleau developer Jeffrey Soffer, Tom Binns, Elsa Seikaly and Jason and Michelle Rubell.

“That’s what I love about throwing a party in Miami. You get this total mix of nationalities, circles and fields, who are up for a good time,” Hicks said. After supping on lobster risotto, most of her guests headed home for much-needed shut-eye, while a few diehards joined her for a nightcap at the upstairs bar.