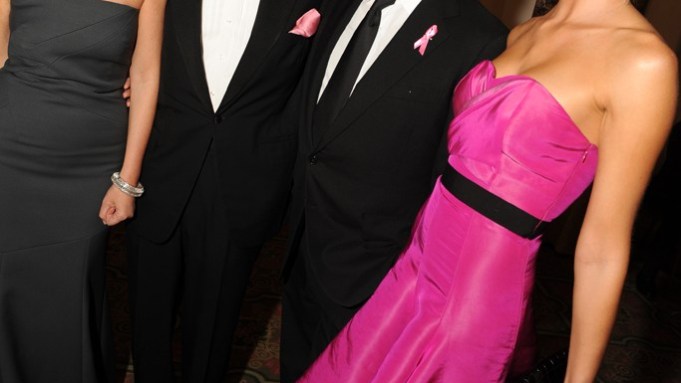 The late Evelyn Lauder hoped to eradicate breast cancer when she founded the Breast Cancer Research Foundation in 1994. She may not have been at the organization’s annual gala in New York City Monday night, but her husband, Leonard A. Lauder, and a record crowd took one step closer to making that mission a reality.

The 1,250 guests — including Elizabeth Hurley, Michael Kors, Donna Karan, Vera Wang, Tommy Hilfiger, Lizzie Tisch, Police Commissioner Ray Kelly and Rep. Carolyn Maloney — came for dinner in the Waldorf-Astoria ballroom, pushing the tables nearly to the back wall and filling both tiers of balconies. The tickets were sold out a month in advance.

“How I wish Evelyn were here to see this sold-out room,” said Lauder, the chairman emeritus of the Estée Lauder Cos. Inc. and senior member of the board, as he began the program. “She would be tickled pink,” he asserted in allusion to the breast cancer crusade dress code. He added that almost $5.3 million had been raised before the event began, nearly 20 percent more than the prior year. A live auction later pushed the total closer to $6 million, beating 2004’s record of $5.5 million with 1,100 guests in attendance. The hot auction items that drew bids of $50,000 and $60,000 were four-day stays in Lauder’s vacation homes in Palm Beach, Fla., and Aspen, Colo.

Asked how he prepared himself for the emotional drain of the evening, Lauder, who assumed the title of acting chairman of BCRF following his wife’s death in November, replied, “I’ve lived this my whole life with Evelyn. This is just the next chapter in my life. But it’s a new chapter: life with Evelyn looking over my shoulder but not at my side.” He then paused and added, “She’s at my side, always.”

After a video portrait and a series of speeches, the program hit its high point with a set performed by Sir Elton John. Because he was unable to attend either of Lauder’s memorial services, the singer selected his set list of nine songs — which included “Tiny Dancer,” “Rocket Man” and “Your Song” — with her in mind. He added that he has been involved with the event for 12 years “and I always will be. I pledge to you Leonard, your dream is my dream. I passionately believe in what Evelyn has created. She lives on; she is an inspiration to us all. I will never let you down.” John also gave a shout-out to Dr. Larry Norton, scientific director of the BCRF, who helped Lauder found the organization, calling him “a f—ing amazing man.” John then tore into his performance with vigor and intensity, jumping after most of songs as if he had scored a touchdown.