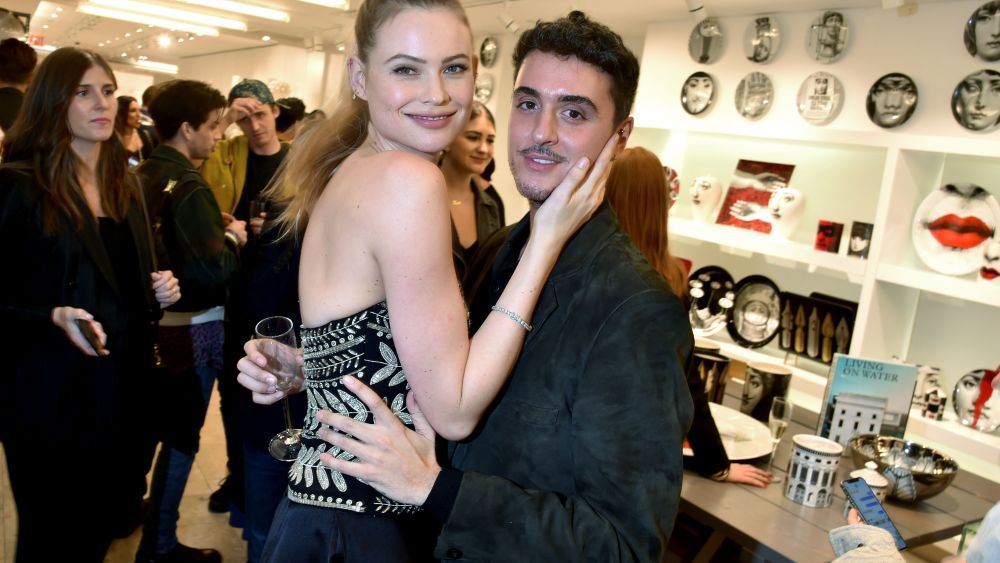 “I think we met in 2007 in Miami at a Victoria’s Secret fashion show, which is so funny…It’s been such a long time,” she said sipping Champagne at the gathering at Barneys New York. “He came to my bachelorette party. He came to my wedding. He is an amazing, special individual.”

But despite their close friendship, Korban still hasn’t designed any of her homes, with Prinsloo joking that she couldn’t afford him when they first met. Now that she’s one of the top-earning models in the world and married to Maroon 5 frontman Adam Levine, “never say never.”

As for tomorrow’s Victoria’s Secret show in New York, which will be her 10th time strutting down the catwalk for the brand after a two-year hiatus during which she had her two daughters — Dusty Rose and Gio Grace, she’s excited, but nervous.

“I’ve been working out so much. I’ve been doing normal, boring things — eating healthy, waking up at 7 in the morning to work out, which is 4 in the morning for me in L.A., so I’m like ‘nooooo’,” she said.

Her advice to models walking their first show? “It goes by so quickly. Just really appreciate the moment and have so much fun and remember every detail and remember that feeling of right before you step on the runway…Everyone is so nice to each other…I’ve known half of them for 10 years so it truly feels like a little family. I just want the young girls to feel included in that.”

Elsewhere at the party that was chockablock with Korban’s model pals, Architectural Digest Editor Amy Astley, who was cohosting alongside Prinsloo, told WWD that despite working with the best designers, she does her home herself.

“The designers who work with AD — I can’t afford them. I have a really modest apartment. I do it myself. I actually enjoy doing it myself, but I will say that I have a lot of designer friends and they come in and give me some advice,” she said.

As for Korban, whose new book ‘Ryan Korban: Interiors’ is his second tome, he’s focusing on big condominium projects for now, as well as launching his own furniture line in August.

He won’t, however, forget his fashion past, having designed homes for fashion designers including Alexander Wang and stores and showrooms for the likes of Balenciaga and Joseph Altuzarra.

“I’ll still be working on everything but focusing on residential development,’ he said.