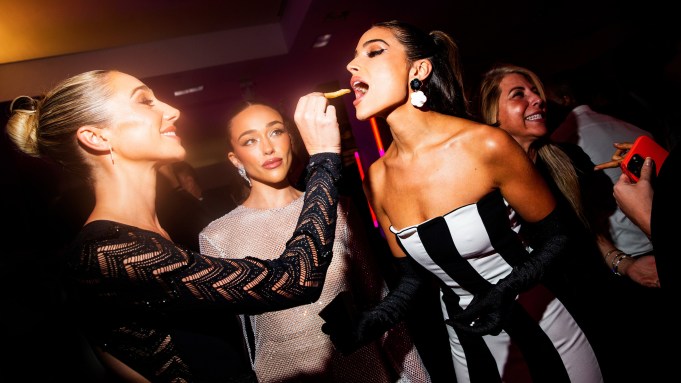 Shooting parties is something of a guessing game when it comes to actually being able to “see” who is who in the ever dimly lit (bordering on pitch-black) settings that the “NYFW party” du jour relies on for its exclusive allure. No lights, no candles. Maybe, maybe, if you’re keen, you’ll clock a low-watt minibulb in the softest white that ever existed, covered by an absolutely opaque vintage lampshade, on a side table in a grim corner, or a ceramic retro sconce with an adobe color finish, emitting zero light and mounted way higher than even a very tall person’s eye-level — or (my favorite), you’ll be able to catch a glimpse of someone by the light of a nearby guest-of-a-guest, on their phone the whole time. And I don’t mean all of these scenarios at one party: scoring all three at once would be a triple double-cherry on a slot machine. You take what you can get.

So when shooting candidly, I usually don’t know “who” exactly is in my frame until looking at the photos afterward and seeing what the flash reveals. Which, I must say (even though it sounded like I was complaining), is pretty fun. It’s sort of like a grab bag from Claire’s, circa 1996: you don’t know what’s inside, but you buy it anyway because you know it’s gonna be good.