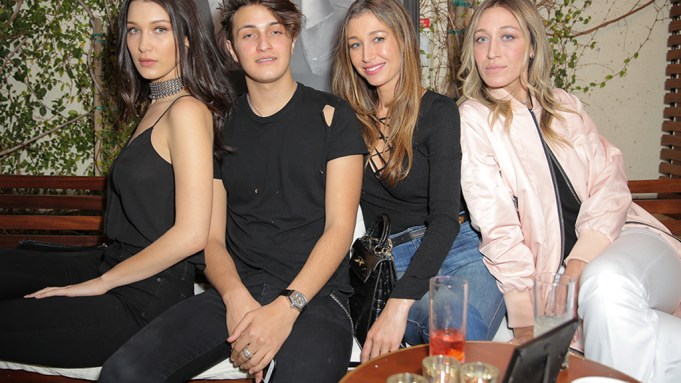 “It’s so loud,” Bella Hadid said over blaring music. The model — aka Gigi Hadid’s younger sister — was seated in a private room at West Hollywood’s Sunset Tower Hotel. She had yet to make her way toward the poolside terrace where a party was being thrown in honor of her new Joe’s Jeans ad campaign which debuts on Monday. “It’s in our honor,” Hadid politely corrected, while nudging fellow model Matthew Noszka, who appears alongside her in the black-and-white images. “No, it’s all her,” Noszka added. “The spotlight is on her, man.”

“God, there are so many people here right now,” Hadid said in disbelief. The model, like her sister, has been on a hot streak, having recently walked in Givenchy and Chanel’s runway shows in addition to landing campaigns with Marc Jacobs, Balmain and Topshop. She said working with Joe’s was another important moment for her.

“You know, I’ve done campaigns before, but this is a really cool campaign for me,” she said. “It’s definitely a stepping stone so, you know, I’m excited about it.” She added, “They sent me a bunch of clothes today, but I wore my Joe’s jeans that I already had. I like working for companies that I actually like to wear.”

“Bella represents a new world of models right now,” Joe’s President and chief executive officer Suzy Biszantz said of why Hadid was the perfect fit to reinvigorate their brand. “She goes from the catwalk to casual really well. She was right for the brand in terms of her personal style. We’re working with her at the right time; she’s really on the rise.”

Hadid said her favorite Joe’s style is the high-rise skinny jean. “I wear it literally every day,” she said. As for how she fits so perfectly into those jeans, the model admits she isn’t big on exercise despite her daily pizza indulgences. “If I have a shoot coming up and I need to be fit, then I’ll work out every day and I’ll be really healthy and try. But most of the time walking around New York is a lot of exercise for me.”

There was no pizza at the party, but there were trays of lobsters rolls, crab cakes and risotto balls with cookies and cupcakes for dessert. Hadid spent most of her time hanging under a canopy with family. While Gigi wasn’t in attendance, she was joined by half-sisters Marielle and Alana and her 16-year-old brother Anwar, who signed with IMG Models just last month. What has she told him about joining the family business? “Just be confident,” she advised.