The real star attraction was the event’s ambassador, Catherine Deneuve. 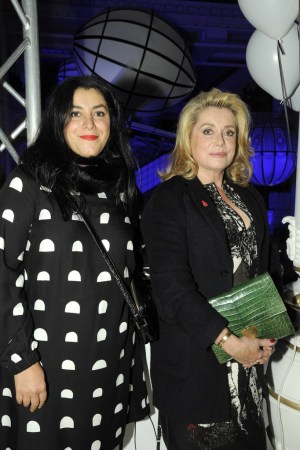 But the real star attraction was the event’s ambassador, Catherine Deneuve, immortalized by Marjane Satrapi in a series of playful illustrations for the store’s window displays based on Deneuve’s favorite places on Paris’ Left Bank, where the Le Bon Marché is located.

“She is the incarnation of the Parisian, so elegant and at the same time so humorous and rock ‘n’ roll,” said Emma de Caunes who is working on an album with her husband, British comic book artist Jamie Hewlett.

“She is the symbol of Paris — of France — and the greatest French actress. She is a fatal beauty. Her features are so incredibly fine she is difficult to draw, so I decided to concentrate on her attitude,” said Satrapi, who already worked with Deneuve on her animated film “Persepolis.”

Satrapi is planning an exhibition of her paintings for Paris gallery Galerie Jérôme de Noirmont for January. Deneuve is also working on an American movie for 2013, but declined to disclose details.

Pausing to chat to guests as she swept through the crowds, Deneuve said her favorite memories linked to Le Bon Marché included coming to the store to buy Christmas tree decorations during the holiday season.

French singer Thomas Dutronc, whose mother, Françoise Hardy, is another French icon, just returned from London clutching the first copy of his duet with Irish rockabilly singer Imelda May. The single will be released during the holiday season. “She has such incredible style, it’s so ‘Mad Men,’” he enthused. He later disclosed that he’s in the final stages of negotiation with a “major” Italian men’s label to star in its campaign.

A black and white documentary directed by Loïc Prigent screened in a temporary theater on the store’s ground floor, meanwhile, following Deneuve around her top ten Left Bank haunts.

The actress can be seen kicking off her Prada shoes to sit on the lawn of L’esplanade des Invalides, caressing the rhinoceros statue in front of the Musée d’Orsay that reminds of her childhood, and grumbling about traffic while chain smoking in car rides between each spot.

“When you go to the cinema, the seats are very important,” she tells the camera. “They need to be comfortable but not too comfortable otherwise there’s always the danger of one falling asleep.”