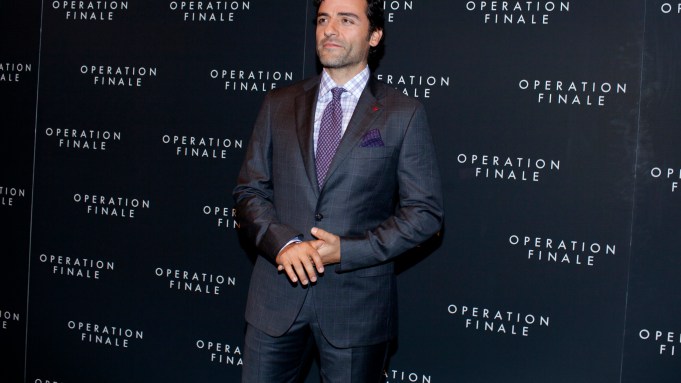 “I just wanted to wear high-waisted pants,” said Nick Kroll on what attracted him to his latest film, “Operation Finale,” at Thursday night’s premiere held at the Walter Reade Theater at New York City’s Lincoln Center.

The film follows the real-life mission conducted by a top-secret team of Israeli agents to travel to Argentina in the early Sixties where Adolf Eichmann, one of the chief architects behind the Holocaust who’s played by Ben Kingsley, was hiding since the end of World War II. The team’s plan to quickly sneak out of Argentina so he can stand trial in Israel gets delayed, and agent Peter Malkin, played by Oscar Isaac, has to engage Eichmann to get a confession for his crimes.

“With all historical movies based on horrific things, it’s just being able to, as humans, reflect on our abilities to do evil and make terrible mistakes, but also our power to overcome them,” said Haley Lu Richardson, who plays Sylvia Hermann, the girlfriend to Eichmann’s son who tips the Israeli authorities on Eichmann’s whereabouts. “This movie is all about overcoming and bringing justice.”

The premiere brought together the cast, including Kroll, Mélanie Laurent, Joe Alwyn, Lior Raz, Michael Aronov and Kingsley and Isaac, who both sidestepped print reporters.

While the project is a period piece, director Chris Weitz highlighted the social and cultural significance of the film as it relates to today’s landscape.

“Unfortunately, we’re experiencing throughout the world this upsurge in authoritarian tendencies in the manipulation of people’s sentiments against immigrants and the other,” he said. “It’s a dangerous thing for a democracy. Anti-Semitism isn’t the only thing going on right now. There’s anti-immigrant sentiment and there’s anti-black rhetoric. I think it’s important to shine a light on what that’s done in the past.”