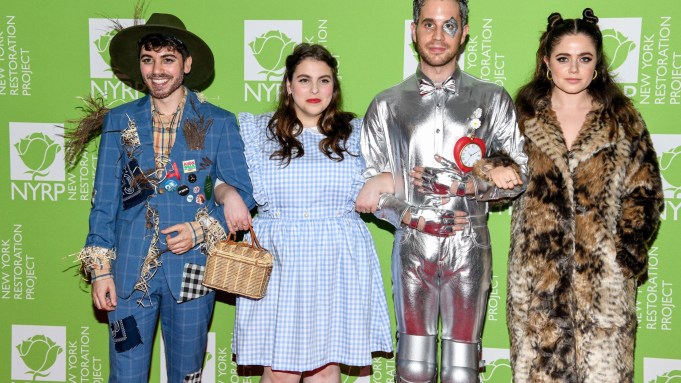 “It’s a fund-raiser,” Bette Midler said on Thursday night. “We put the fun in fund-raising, baby.”

At her annual Hulaween event, Midler always finds a creative way to poke fun at the fact that she’s asking for bundles of cash to support the New York Restoration Project, the nonprofit she founded.

This year was no exception.

Most galas are thrown in efforts to raise money, but very few get as into it as the seasoned actress. For 2019’s Hulaween, she enlisted Beanie Feldstein and “The Politician” star Ben Platt — Los Angeles natives who have known each other since middle school — to perform a song-and-dance medley coaxing guests to donate.

For all the jokes, it’s a worthy cause — NYRP restores parks and gardens and has planted one million trees across the city and outer boroughs. Midler’s celebrity friends came out in droves to support, and dressed up according to the theme of “haunted” Old Hollywood: Catherine Zeta-Jones was Jean Harlow; her husband Michael Douglas came as Lawrence of Arabia, and Judith Light transformed into Marlene Dietrich. Michael Kors judged the costume contest with his husband Lance LePere, while Cyndi Lauper capped the night off by performing her biggest, most nostalgic hits, “Time After Time,” and “Girls Just Want to Have Fun.” Jane Krakowski, Lucy Boynton and her “Politician” costar Julia Schlaepfer also joined in the festivities.

Midler herself was dressed as Mae West, an actress, comedian and playwright whom Midler said she was a fan of — even after West’s lawyer sent her a cease-and-desist letter years ago.

“I was doing an impersonation of her on the Johnny Carson show,” she said. “Because we didn’t have the Internet, I didn’t know if she was dead or alive. Her lawyer sent me a cease-and-desist letter the next day, which I kept and which is one of my prized possessions. She was fabulous, what a hoot. And she wrote all her own material.”

Midler then shifted into character, putting on her best West voice — with no threat of a cease and desist in sight.

“We want to raise $2 million tonight, because we have parks, we have children to teach, we have rivers to clean, we have advocacy,” she said in a swaggering transatlantic accent. “We’re gonna get rid of straws, plastic bags out of the trees. We’re going to clean this piece-of-s–t town up, or we’re gonna die trying, and that’s the truth, Ruth.”