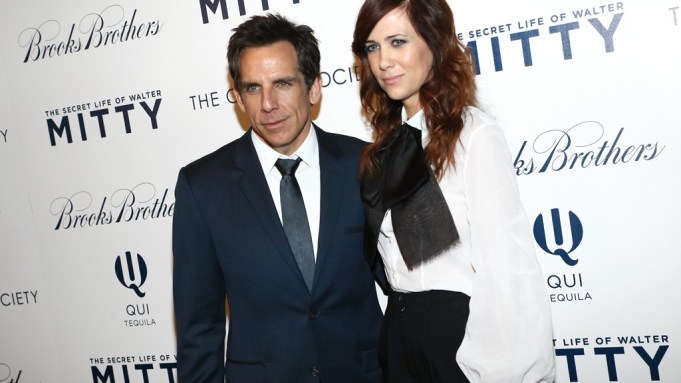 Unlike most of Stiller’s better-known films, this one is a bit of a weeper, featuring some scenes of satire, but dominated by sentimental moments.

Ballou sat near the front row, his million-dollar face modestly tucked underneath a black hat, blank, revealing no emotion. But the movie snuck up on him. Maybe it was Shirley MacLaine, maybe it was the soaring score, but Stiller made the real-life Zoolander well up.

“I’m kind of like that, though. I’m a sensitive guy,” he said. “I get lost in the movies sometimes.”

Ballou recently turned 37, which makes him of just the right generation for whom “Reality Bites,” Stiller’s 1994 directorial debut, is a cultural touchstone.

“I’ve seen it 50 times,” he said. “I was a few years younger than that crew that was in the film, but not too young to not get it.” In 2001, Stiller released “Zoolander,” and it was panned by critics, but eventually managed to certify Stiller’s status among comedy nerds and earned him a new fan base of really, really, ridiculously good-looking male models. The screening Wednesday night drew both Ballou, one of the world’s highest-paid models, and Judah Friedlander.

“The first time I saw it in a theater, I saw some of the pictures I had done and he had mocked them up. His face was inserted into the photos. And I was like, ‘He’s making fun of me,’” Ballou said. “I don’t want to say I was offended, but I was definitely looking at myself and how silly what I do sometimes is.”

The model was at the Skylark in Midtown Manhattan. His drink of choice: a shot of tequila over an ice cube. The screening, which precedes a Christmas Day opening, and the party were presented by the Cinema Society and Brooks Brothers.

“I’ve seen that movie 20 times,” he said, the shot since replaced by a glass of tequila, straight up.

Even if he tapped a vein of edgy humor in his work as a director in films like “Zoolander” and “Tropic Thunder,” Stiller, as an actor, made his mark playing lovable losers in broad, mainstream comedies and later in family-friendly, billion-dollar-grossing franchises — “Meet the Parents,” “Night at the Museum.” His range has grown his fan base into a big tent, so that in attendance Wednesday were a number of mismatched personalities who wouldn’t otherwise have any business being in the same room together — Richard Kind and Garrett Neff, Caroline Rhea and Alex Lundqvist, Howard Stern and Jeff Koons.

“Mitty” is a 180-degree turn, an earnest, well-meaning dramedy about the title’s lovable loser — a daydreamer who escapes into a rich fantasy life when he can’t quite cope with the real world. In an introduction, Stiller acknowledged the professional pivot.

“I feel very lucky to have had a chance to have had this experience with this material and that [20th Century] Fox took a chance with this movie, which is not really a straight-ahead studio movie,” he said. That chance cost $90 million, the film’s reported budget.

Ballou bought Stiller as a sweet-natured sap even as much as he had as a dopey model.

Some of the more tender scenes come from the character’s attempts to woo a love interest, played by Kristen Wiig, and his conversations with his aging mother (MacLaine), and they can come across as heavy-handed, with their earnest dialogue and lush score. But Ballou fell for it hook, line and stinker.

“My reaction was a few laughs and a few tears,” he said.

In one early scene, Stiller, whose character is a photo handler at Life magazine, receives a gift from a famous, globe-trotting photographer, played by Sean Penn.

“He’s this little, lonely worker, that such a big star takes note of him, even that kind of stuff gets me,” Ballou said.