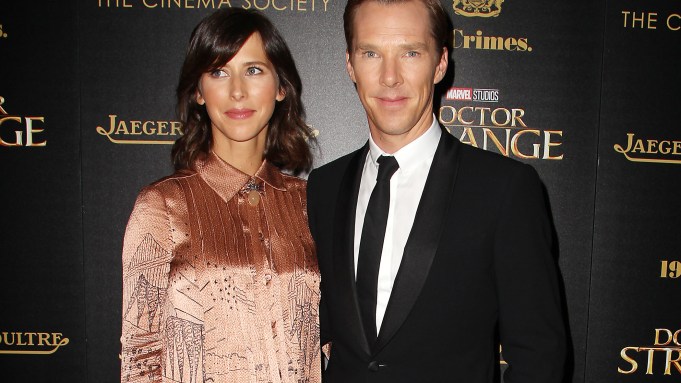 On Tuesday in the heart of Times Square, Benedict Cumberbatch and his team crept into the AMC Empire 25 Theatre on 42nd Street to introduce his new film, “Doctor Strange.” The movie is Marvel’s latest in the web of interconnected superheroes, but the main character is by no means a household name. Yet it’s garnered major attention and box-office dollars, raking in $87.7 million opening weekend in 33 international markets. A ComScore study showed Twitter users slammed the social media microsite with conversations, racking up over 457,000 tweets about “Doctor Strange.”

Perhaps the excitement is due to the film’s star, Cumberbatch, who is soft-spoken and eloquent, but elicits serious frenzy among fans and laypeople alike. Even if it’s the case that the 40-year-old British actor is the draw, Cumberbatch isn’t concerned. He maintains a modest disposition, and thinks deeply about the movie’s messages — ones that he says are spiritual and teach lessons about life and death.

When asked why people are so fascinated by superhero movies, Cumberbatch was momentarily stumped.

“I don’t know, but I think like any genre, there’s always a level of projection,” he said, pausing. “It’s always some kind of reflection of your moment, or society. I think Marvel does that well. They’ve done that with politics in previous films, and with this film, it’s more on the profound level of touch. Mortality, and [questions of] what reality is or isn’t — still managing to sew it all together with humor and the usual thrills and spills.”

At this point, he stopped talking and looked ahead, seemingly lost in his own thoughts while muttering to himself.

“But I guess escapism, of course, there’s gotta be an attraction to that, like going on a roller coaster ride, or seeing a horror film,” he said in barely a whisper. Then he snapped back and continued. “In the instance of this guy, he’s human. His stuff is learned by hard work and study. To teach selfless, self-empowerment is a pretty cool thing to get out of a blockbuster.”

The “stuff” Doctor Stephen Strange learns in the film is superpowers — ones he teaches himself at a mystic institution, led by The Ancient One played by Tilda Swinton, in Nepal following a horrific car accident that strips him of his ability to hold his hands steady.

“His trajectory is from a very materialistic man in a gilded cage, and he’s lonely in that,” Cumberbatch said of his character. “There’s nobody to share it with.”

Those material goods to which Doctor Strange attached himself were displayed prominently at the screening: representatives from Jaeger-LeCoultre (which hosted the event with Lamborghini and The Cinema Society) attended, pointing out flashes of the brand’s watch face in multiple scenes. The midnight blue Lamborghini that Doctor Strange drove was parked on a red carpet outside AMC theater, where Christian Slater crouched low to get a better look. Then he, wife Brittany Lopez and Caroline Rhea of “Sabrina the Teenage Witch” fame piled into a Suburban headed for the after party.

“These Disney dollars are being put to work,” one guest said while stepping into Bar SixtyFive at the Rainbow Room, admiring the geometric ceiling, open bar and view of the Empire State Building. Guests piled their plates high with buffet fare and plucked goblets of 19 Crimes’ deep red wine off servers’ platters.

Valentino Garavani, who attended the screening but ducked away from the cameras quickly, was nowhere in sight. Meanwhile, Cumberbatch was holding court at a table with his friends and associates. One pulled him aside to introduce him to a man in horn-rimmed glasses who offered up his hand to shake. Cumberbatch waved it away and went in for a hug.