The event at the Bel-Air home of Sutton and Christian Stracke felt more like a casual backyard gathering than a serious art affair. 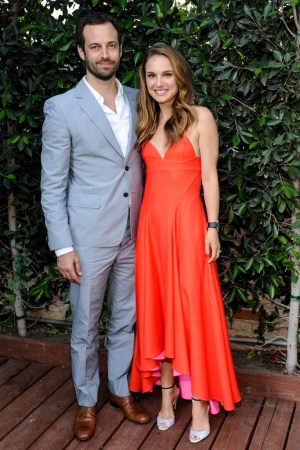 The inaugural benefit for Benjamin Millepied’s L.A. Dance Project, held at the Bel-Air home of Sutton and Christian Stracke on Thursday night, felt more like a casual backyard gathering than a serious art affair. The laid-back air was by design. From the dance floor, which was constructed over the Strackes’ swimming pool, to the performances themselves, which began when the seven dancers seated among the dinner crowd stood up one by one and started dancing on the lawn, the evening had a feeling of playfulness.

“You weren’t expecting a serious dance performance, were you?” asked Millepied. “This is just something that the dancers put together for fun.”

He was being modest, as the first piece was an excerpt of a work recently performed in Paris to rave reviews and the second was a preview of a piece that dance “It” boy Justin Peck of New York City Ballet is choreographing for LADP (the movement performed on Thursday was created just two days prior).

Millepied’s wife, Natalie Portman, who cochaired the event with Catharine Soros and Sutton Stracke, said, “I’ve been really lucky to get to watch the company grow. L.A. is such a hotbed of creativity, and you can understand it because you have the space and the environment here that is perfect for creativity rather than consumption.”

Portman’s friends Laura and Kate Mulleavy of Rodarte agreed. “It’s much more laid-back than your typical event,” said Laura Mulleavy. “The invite said outdoor garden party with festive summer attire, so I was like, ‘Yeah, jeans!’”

The 140-person crowd was an eclectic mix ranging from Jeffrey Deitch and Barbara Kruger, both of whom have collaborated with LADP, to Reese Witherspoon and Rashida Jones. Designers Monique Lhuillier and Sophie Buhai were also in the mix, as were Cameron Silver, Mike and Irena Medavoy and Giada De Laurentiis.

“It’s because of my five-year-old daughter that I came tonight,” said De Laurentiis. “She’s really into dance, and I wanted to see what exactly this was. Dance was lost for a while, and I really think it’s coming back in a big way. And it’s nice to support something that’s local.”

After dessert, the music switched from Vivaldi to Snoop Dogg, and Jones and her date Will McCormack joined the dancers for a late-night spin on the dance floor.