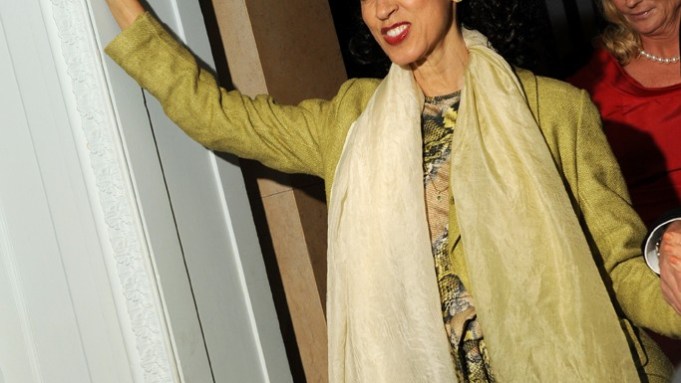 Victoria Roberts didn’t question herself when she captioned her April 30, 1990, New Yorker cartoon that later inspired the title of the new documentary “Scatter My Ashes at Bergdorf’s.” “I did not think of saying, ‘I want my ashes scattered at Macy’s’ or ‘Bloomingdales,’” she tells director Matthew Miele in the film. “Bergdorf’s, that was the only one that worked.” Devotees of the store gathered Monday night at Florence Gould Hall in New York for a screening of the film, hosted by The Cinema Society, Swarovski and Grey Goose.

The movie is a history of the department store, chronicling its journey from a tiny mom-and-pop tailoring operation to retail landmark. Conversations with executives — former chief executive officer Ira Neimark; Jim Gold, president of specialty retail at parent Neiman Marcus Inc.; the store’s senior vice president, fashion office and store presentation (and media face) Linda Fargo; the store’s tart personal shopper Betty Halbreich — reveal a spate of anecdotes. There was the time Yoko Ono bought 70 fur coats for herself and John Lennon out of trunks then-fur buyer Jack Cohen lugged over to the couple’s apartment at the Dakota (the price tag for the purchase: $400,000).

“The interview list was extensive. I had the pleasure of talking with about 175 people,” Miele told the crowd, which included Dee and Tommy Hilfiger, Eddie Borgo, Vera Wang, Tabitha Simmons, Amy Sacco and Debbie Bancroft, as they took their seats. The breadth of designers featured in the film is considerable, with everyone from Jack McCollough and Lazaro Hernandez to Alber Elbaz making a cameo. “When Karl Lagerfeld said yes, the Olsen twins said yes [then] everybody started saying yes,” Miele explained.

After the film rolled, moviegoers made their way south for the after party at Harlow. Thakoon Panichgul and Wes Gordon stuck by the front bar while Pat Cleveland cozied up with friends in a corner booth. Nicky Hilton noshed on a lobster roll and entertained parents Kathy and Rick at the next table. Nearby, Fargo shared her reaction to the film. “I’ve seen it a couple times but I cringe every time. C-R-I-N-G-E! I was so unconscious of makeup and lighting and, in hindsight, I realize I should have been more mindful,” she said. “I’m not kidding you. And my voice – oh!”