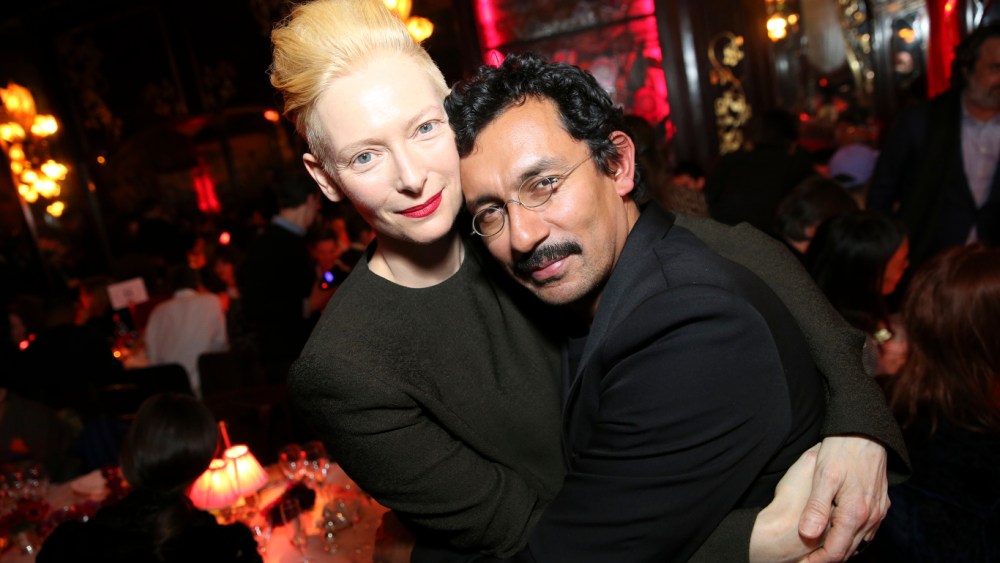 Friends and admirers of Haider Ackermann headed to Maxim’s on Friday night for a dinner following his debut effort for Berluti, where guests including Peter Marino, Marisa Berenson, Lewis Hamilton, Tilda Swinton, Delfina Delettrez, Natalia Vodianova and Liya Kebede gave the designer a hearty round of applause.

“I’m really seriously happy and proud to be here,” Ackermann told the assembly. “The whole Berluti team, they took me in their arms like a family and they made me feel like I belong to a family, and that’s such a beautiful thing.”

The crowd then chanted for a speech from Berluti chief executive officer Antoine Arnault, who promptly obliged. He noted that Ackermann’s appointment marked a new chapter for the brand, which launched ready-to-wear in 2012 under then-artistic director Alessandro Sartori.

“The foundations that we created with Alessandro were very healthy and very beautiful, but I feel that Berluti was ready to go to a next step,” Arnault said. “When we had all these discussions before deciding to work together with you, Haider, you were always extremely straight to the point and extremely precise about what you wanted. I think what we saw today on the runway was exactly what I envisioned.”

Dessert came round shortly before midnight, but Hamilton wasn’t having any. The Formula One champion said he was three kilos (about seven pounds) above his racing weight of 68 kilos (150 pounds). “One kilo extra is a loss of three seconds in a race,” said the driver, who even removes his trademark diamond stud earrings before he gets into his car.

Ackermann capped off his big night by hitting the dance floor with Swinton and Berenson — a chic dance crew if ever there was one.

Earlier, many of those at the dinner packed into one of the halls of the Grand Palais to take in the Berluti runway show. The show also drew a heavy-hitter crowd from the LVMH Moët Hennessy Louis Vuitton ranks, including Bernard Arnault, Delphine Arnault, Sidney Toledano and Pietro Beccari, ceo of Fendi, who holds a supervisory role at Berluti.

Gabriel-Kane Day-Lewis, who is working on an album dubbed “Every Scar Is a Healing Place,” proved he was a bit of an expert on the subject. “Haider is probably one of my favorite designers of all time. I think that people weren’t recognizing how much of a creative genius he is until he finally started coming into the spotlight,” he said. “I like the men’s clothes a lot, because they have this masculine femininity to them.”

Catching up with Lou Doillon before the show, Harumi Klossowska de Rola shared some color on her exhibition, “Retour d’Expédition,” which will open at L’Ecole Van Cleef & Arpels on Sunday. “There’s an animal theme, with a mix of both sculpture and jewelry,” she said.

Sitting next to Antoine Arnault, Bryan Ferry said he’s about to tour the States, which he hasn’t done for a long time. So what about the stage costumes? “Oh, there’ll be a bit of Berluti here and there, that’s for sure,” he chuckled, adding that he has also been working on some music for “Babylon Berlin,” a German series due to launch on Netflix later this year. “It’s set in Twenties Berlin, so a very interesting period for music,” he noted.

Ferry and Anna Mouglalis have a thing or two in common. The French actress said she’s filming a movie based around the Grand-Guignol, a major theater during the Belle Époque in the Pigalle district of Paris. This was her first ever Ackermann show. “I met him through Karl Lagerfeld. He’s a real artist,” she said.

Following the show, Swinton led the standing ovation by leaping from her seat. “Oh, oh, oh…everything — I want all of it!” she enthused.

Usher, who is possibly pursuing a collaboration with the designer, remained deceptively cool on the outside, but was all superlatives. “Man, the colors, the fabrics. That double-sided iridescent suit,” he said. “Amazing to say the least. It was invigorating, exciting, electrifying.”