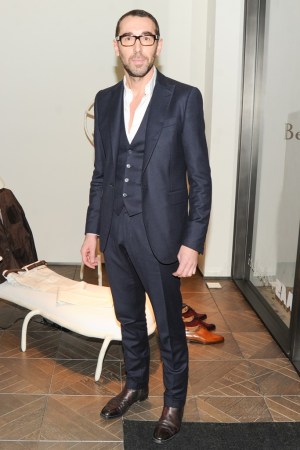 MIAMI — At Art Basel Miami Beach, where so many fashion brands present their collaborations with artists, not all partnerships are created equal. Case in point: the quirky sculptures Dutch artist Maarten Baas created for Berluti, which were unveiled Tuesday night at the brand’s new Design District boutique here.

“It’s challenging to collaborate with artists if you take one collection and try to put together something that’s a look-alike — it’s not really a collaboration, but mostly ‘we were inspired by,’” explained Alessandro Sartori, Berluti’s artistic director. “This is different because we started from scratch. When we do a project together, we see sketches and we share ideas.”

Baas’ tweaked takes on utilitarian bedroom furniture look a bit like they were hand-crafted from white Play-Doh but they have a touch of whimsy that’s actually, perhaps intentionally, an ideal counterpoint to Berluti’s more polished aesthetic.

“We say in France there’s a touch of insolence — l’insolence — and he has insolence,” said Pietro Beccari, Berluti’s chairman and chief executive officer.

Baas, who was Design Miami’s designer of the year in 2009, worked with Berluti on the pieces for about a year. At the Miami boutique, they are on display strewn with clothing and shoes — by Berluti, of course — as they might be in someone’s home.  “I saw this almost like a set design for a theatrical play,” Baas said. “It creates an atmosphere, but in my style, which fits into the Miami world and also with Berluti.”