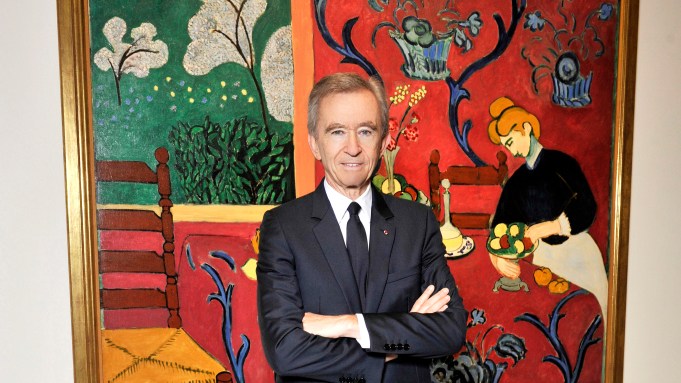 Advantage Bernard Arnault. The Fondation Louis Vuitton on Thursday inaugurated what is being hailed as one of the most important art exhibitions ever held in Paris. The show, entitled “Icons of Modern Art. The Shchukin Collection,” unites 130 major works from the collection of one of the greatest art patrons of the early 20th century, Sergei Shchukin, a visionary Russian collector of French modern art.

Shchukin was a leading Muscovite textile manufacturer who in the late 19th century, on his trips to Paris salons, became part of the Parisian circles championing artists in the Impressionist, post-Impressionist and the Modern movements. He is credited with assembling a collection of the most avant-garde art of his day, one that powerfully influenced contemporary art in Russia.

“What is really for me unbelievable is to have, with my team, been able to convince our Russian partners, the Hermitage Museum and the Pushkin museum, to unify this fabulous collection here in Paris. Following the revolution in Russia it was [broken up]. The first time it has been reunified is here in France in the Fondation Louis Vuitton. It’s very emotional,” Arnault told WWD, as he walked through the exhibition.

Asked if he had a favorite room, Arnault replied: “Not really, because there are so many incredible rooms. What I can tell you is sometimes, in this room here [the Matisse room], people cry – it’s so strong.

“Shchukin was incredible because he was able to assemble, in the beginning of the 20th century, what today is the national treasure of the Russian museums. And it’s a fabulous collection that he assembled in a relatively short period of time, 10 years, I believe,” continued Arnault. “It’s unbelievable. We can only dream of achieving something like that. Times have changed, things are very different today. At that time, when he started, great artists like Matisse or Picasso were not recognized, so he was able, because he had a fantastic eye, to choose them and to buy them relatively easily. Just imagine, these fantastic paintings left France at the beginning of the 20th century, when they had only just been finished, to go to Russia because of him.”

The exhibition, which includes 29 paintings by Pablo Picasso and 22 works by Henri Matisse as well as pieces by Claude Monet, Paul Gauguin, Henri Rousseau, Paul Cézanne and Vincent Van Gogh, spreads across four floors and 14 exhibition rooms, organized in monographic and thematic ensembles like landscapes, self-portraits and still lives.

Corridors leading into the various galleries feature wallpapers based on old photographs of Shchukin’s Moscow residence, the Trubetskoy Palace. The collector would open his home to art lovers, critics and students every Sunday and give personal tours. To highlight the influence this had, works by avant-garde Russian artists who were inspired by the Shchukin collection, like Kazimir Severinovich Malevich, Aleksandr Rodchenko and Lyubov Popova, also feature in the show.

Screened in a separate room is a multimedia work by British filmmaker Peter Greenaway and Saskia Boddeke based on the relationship between Shchukin and Matisse. Nodding to the Ballets Russes, which were also a major influence in the early 20th century, meanwhile, a program of dance and musical performances has also been lined up to accompany the show, which ends on Feb. 20, 2017.

Louis Vuitton’s Nicolas Ghesquière — who attended the opening along with fellow LVMH group designers Dior’s Maria Grazia Chiuri, Dior Homme’s Kris Van Assche and Berluti’s Haider Ackermann — said he was particularly taken by the Picassos, which included “Woman with a Fan” one of two works Shchukin bought on the spot when Matisse took him to see Picasso’s Montmartre studio in 1908. “I think what’s amazing is to see all these fantastic paintings in the same location — and what a location,” said Ghesquière. “You know how much I’m a fan of old and new, and this is a great combination of modernity and classicism.”

By his side, Catherine Deneuve said she planned to “pop back up to see the incredible Matisses,” after the dinner that was held in an auditorium overlooking the site’s cascading fountain.

Perusing works by Monet, Xavier Veilhan related the artist’s “Water Lilies” series, “this idea of creating a whole environment that he invented,” to a work he’s preparing for the French Pavilion for the Venice Biennale next year, inspired by German artist Kurt Schwitters’ “Merzbau” construction from the Twenties. “I’m working on this idea of a recording studio that looks like it has been through an earthquake. So you’ll go through a series of rooms with musicians recording works, it’s multidisciplinary,” said Veilhan, who revealed around 100 musicians will be involved in the project, including Air’s Nicolas Godin and Quincy Jones.

Diana Picasso paused in front of a portrait of Benet Soler made by her grandfather Pablo Picasso in 1903. “It’s very moving to see one of the most spectacular collections in the world by a collector who had the courage to buy such works so early, a visionary,” she said.

Speaking at a panel earlier in the day, André-Marc Delocque-Fourcaud, Shchukin’s grandson, said: “I can say I have seen a miracle in my lifetime. Five years ago nobody here had heard of Sergei Shchukin and the best curators of France are here today. One hundred years ago, the collection was completed, and 100 years on here we are in this wonderful location. As [Mikhail Piotrovsky], the director of the Hermitage Museum, said there’s something mystical about it. The world will be divided into two parts, those who have and those who haven’t seen the Shchukin collection.”

Jean-Paul Claverie, who helped head up the project, said he believes the show’s accompanying 500-page catalogue, “full of interesting scientific content and references,” will become a “landmark reference for all of the art libraries in the world.”

Marina Loshak, director of the Pushkin State Museum of Fine Arts, said: “Sergei Shchukin’s spirit is moving around us in this room, we can feel it.