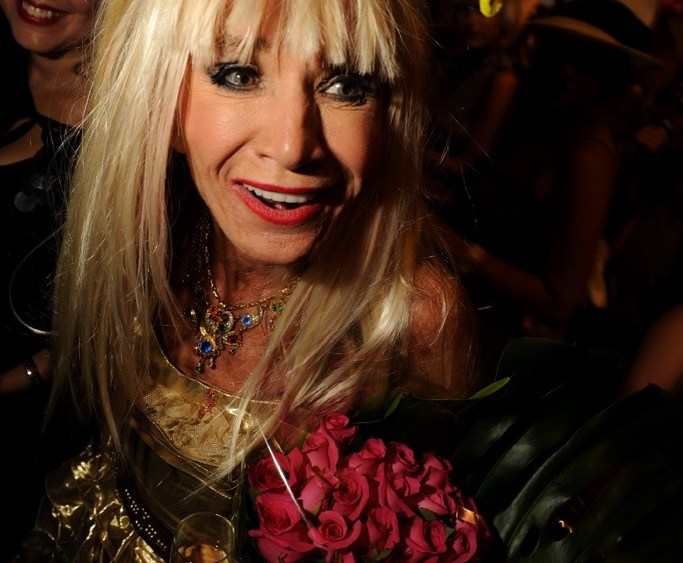 Bubble gum was the color of choice for streamers, balloons, tablecloths, peony-looking decorations and the rest of the decor at Murano’s. The strapless gold lamé dress Johnson wore was eye-catching, and her birthday cake appeared to be equally done up. The triple-decker chocolate cake was adorned with hot pink and bright green ruffles of icing, leopard-looking spots and a giant Barbie-worthy bow, thanks to Buddy Valastro Jr. of Carlo’s Bake Shop, who is better known as “The Cake Boss” on TLC.

Johnson and her daughter, Lulu, had their own reality show to tend to. The designer could not be missed in the crowd — a camera crew caught her every move for the new reality show “Betsey + Lulu.” Being shadowed seemed to wear a bit thin on Johnson, who rolled her eyes once or twice in the production team’s direction. The reality was that all she really wanted for her birthday was some family time. The designer planned to have a two-day celebration since 45 relatives were flying in for another round of celebrating Saturday. “I’ll be decorating and doing floral arrangements all day Saturday and then we will all have dinner Saturday night,” she said. “It really will be Christmas in August.”

Friday, her actual birthday, was a working one. In addition to filming the reality show, Johnson trekked out to Long Island City to meet with Steve Madden, who owns her company, to review products and iron out plans for her runway show next month. (Her birthday gift from Madden’s company was a rhinestone-encrusted horse whip, which she jokingly had someone demonstrate on her backside.) The show will be a retrospective of her career but will also feature styles from her new dress line. As creative director under the umbrella of Steve Madden, Johnson said now she gets the whole package in terms of new pursuits, such as the new dress collection with The Levy Group.

The milestone birthday made her nostalgic for her freestanding stores, most of which were shuttered this past spring. “It was so much more than a regular company. I really feel so happy about my career,” she said. “The people I worked with are my girlfriends for life. It was like one of those little bubbles that have glitter and [fake] snow inside when you shake them.”

Johnson’s personal trainer Bogdan Goia, owner of The Studio, was on hand to give her a lift and a beautifully wrapped present. “I hate working out. I joined every gym there is and never went. We’re going to do a 13-minute exercise video. I figure if it is fun to do, it’s only 13 minutes and I get to look at Bogdan, then I can do it,” she said.

With drink in hand, Johnson said, “At 70, I want to have a good time and not worry so much. Unfortunately, my 80th is not that far off. That’s when it gets scary.”