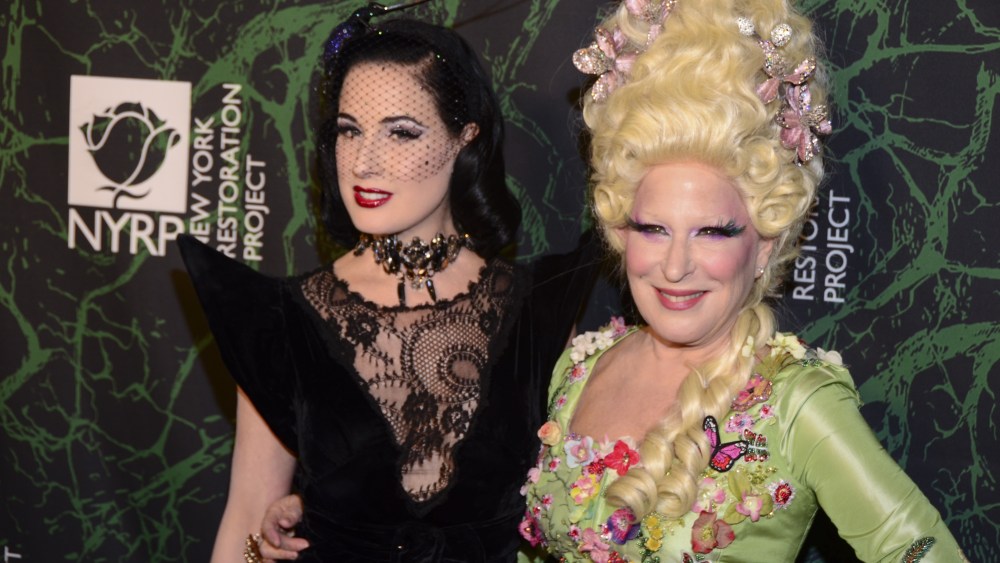 Hulaween in a church? Why not?

“It is the first time in 25 years of performing burlesque that I’ve been banned,” said Dita Von Teese from the chapel of the Cathedral of Saint John the Divine. She’d been set to perform during cocktail hour at Bette Midler’s annual NYRP charitable costume extravaganza Hulaween, which popped up this year inside of the Gothic New York landmark.

“I’ve performed in many churches before, but this is the first working church,” the burlesque star clarified. She was dressed relatively conservatively, in a long black gown and a Piers Atkinson insect headpiece. “I was in my dressing room — and my dressing room was, like, office of the clergy. And the bishop said no. I don’t blame them, really.”

There were even more clergymen walking around than usual, although most were costumed Hulaween guests. This year’s theme was “Garden of Earthly Delights” — a nice religious tie-in for the setting — and many had dressed with floral and fauna in mind.

Michael Kors and husband Lance LePere were coordinating in apple-patterned suits, with a fake snake coiled around their necks. Just before dinner, Kors was busying surveying the procession of costumes streaming into the main hall for dinner; the designer was a judge for the evening’s costume contest.

“I like the combination of people going crazy for the night, I like a mix of things,” said Kors, asked about his judging criteria. “It can be on theme, it can be off theme, just whatever provokes me.” Winners included Susanne Bartsch dressed loosely as a cow; a compost-themed gown — and another guest banned from the church: “the actual Antichrist herself.” Not quite; it was someone dressed as Kellyanne Conway on Inauguration Day with a crew of suited “bodyguards” in tow. They took home the prize for best group costume.

Like Kors and LePere, event emcee Judy Gold and her partner were also coordinating, although they strayed from the garden theme, dressing as Billie Jean King and Ilana Kloss in tennis whites.

“I was really inspired by the fact that we played tennis with Billie Jean King this summer,” explained Gold, before going on to rave about the tennis icon’s feminist appeal, highlighted this fall in biopic “Battle of the Sexes.”

“When you watch the film you can’t believe what these men got away with saying,” Gold continued. “And how far have we come from there? Not that far.”

And that’s a real Halloween scare.