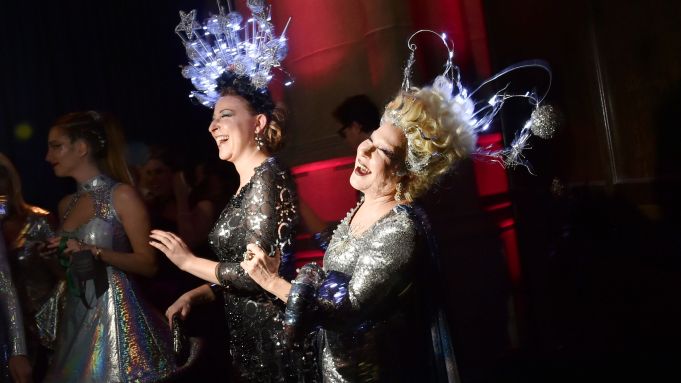 It’s hard to deny the stressful news cycle has pervaded society’s collective psyche. But on Monday night, Bette Midler and the New York Restoration Project attempted to provide some respite; together, they held the annual Hulaween party at the Cathedral of St. John the Divine uptown. The theme this year was “Hulaween in the Cosmos,” and it seemed all the attendees, including Jane Krakowski, Michael Kors, Marc Jacobs and Frankie Grande, were more than happy to embrace space and get away from planet Earth for a few hours.

Midler was dressed as “a diplomat from outer space,” as she put it.

Midler noted that NYRP, which brings outdoor and gardening spaces to New York, raises almost all of its operating cost at this event, along with another one held in the spring.

“I feel like we try to give people an opportunity to escape and a chance to have hope,” she said. Kors, the judge of the night’s costume contest, arrived with his husband Lance Le Pere dressed as matching aliens in black suits dusted with silvery star and moon appliqués. Not far behind them was Krakowski, who wore a bouffant hairstyle beneath a plastic astronaut’s helmet. She’d just celebrated her 50th birthday but wanted to hear no more about it.

“[I’m going to] stop counting birthdays,” she said. “This might be the year we never discuss my birthday again.”

Grande bounded around like a puckish creature dressed in sparkling Giuseppe Zanotti sneakers, and not much else — he wore a thong Speedo and had his body, face and hair painted as the galaxy.

Before dinner began, Midler joined Broadway performers Christian Dante White, Michael Hartung and more onstage, substituting lyrics to famous songs with comedic pleads for donations. It was a refreshing and funny deviance from the usual gala, in which mentions of fund-raising are considered gauche.

Politics made its way into the evening. The Bishop Daniel took the podium and gave a short speech, touching on the shooting that occurred at the Tree of Life Synagogue in Pittsburgh over the weekend.

“We need the restoration of hope and trust in our elected officials,” he said. “Starting with the great pumpkin in the White House.”

The crowd roared in approval.

Who Is Doja Cat?

Priyanka Chopra on Her Marchesa Bridal Shower Dress: ‘It Made Me Feel Like a Princess’

This Is How New York’s Literary Community Gets Down: The N+1 Benefit